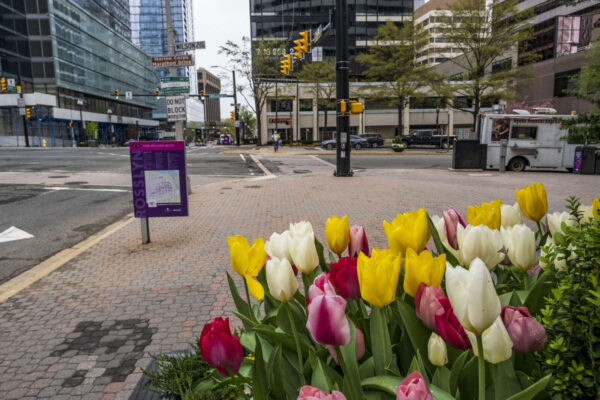 New Irish Pub Now Open in Pentagon City — “If your notion of an Irish pub is a static menu of fish n’ chips in a shamrock-decked bar, chef Cathal Armstrong wants to change that perception with Mattie and Eddie’s. The James Beard-anointed chef, who championed seasonal Irish cooking over 14 years at Alexandria’s Restaurant Eve, just opened the gastropub with a large outdoor patio in Pentagon City.” [Washingtonian]

Extended Power Outage in Barcroft — A driver crashed into a utility pole at S. Buchanan Street and 6th Street S. in the Barcroft neighborhood Sunday, initially knocking out power to thousands. Hundreds of homes were still in the dark until early this morning. [Twitter]

Candidate Comes Out Swinging At Dem Meeting — “[Chanda] Choun, who is attempting to unseat sitting Democrat Takis Karantonis in a June primary, did not pull many punches in an April 7 kickoff speech before the Arlington County Democratic Committee rank-and-file. ‘Takis was not the best candidate to represent Arlington’ during a politically and racially charged era, Choun said… If elected, Choun said he would be an elected official who ‘goes beyond the platitudes and buzzwords’ to promote an aggressively left-leaning agenda. One example: Choun said he wanted the county to establish a ‘truth and reconciliation commission’ to focus on equity issues.” [Sun Gazette]

School Board Advances Budget Proposal — “The School Board adopted its FY 2022 Proposed Budget at its April 8 meeting. The proposed budget expenditures total $699,919,805. The School Board amended the Superintendent’s FY22 Revised Proposed Budget by reducing the budgeted expenditures by $6,796,056 and 35.00 FTE and replacing the 2% cost of living adjustment with Compensation Option 1. Compensation Option 1 provides different compensation models by employee scale to ensure that every employee in the school division receives a compensation increase.” [Arlington Public Schools]

Pentagon Police Officer Faces Murder Charges — “Takoma Park police have charged the off-duty Pentagon Force Protection Agency officer they say shot and killed two men Wednesday morning in Montgomery County, Maryland. The officer has also been charged for an alleged assault that happened last year. David Hall Dixon, of Takoma Park, has been charged with two counts of second-degree murder, two counts of use of a handgun in commission of a felony and reckless endangerment.” [WTOP]

Don’t Hang Up on 911 — From Arlington County: “Oops, did you call 911 by mistake? It’s OK, just stay on the line and tell the friendly dispatcher it was an accident. That way, they can confirm there’s no emergency… Otherwise, we’ll have to call you back, taking away a dispatcher who could help someone who needs it.” [Twitter]