One sunny weekday afternoon last week, as the temperature clocked in at a perfect 72 degrees, there were just four bikes parked at Metro’s new $2 million bike parking facility in East Falls Church.

The scene contrasts with how cycling advocates remember the station pre-pandemic, when dozens of bicycles were parked out front on any given day.

“East Falls Church has been one of the most heavily used stations for cyclists in the past,” said David Cranor, who writes for the cycling blog TheWashCycle.

The 92-spot facility made its debut last August — in the middle of the pandemic — when the East Falls Church station reopened. Set to open in 2015, the structure was delivered five years late and $1.1 million over budget, costing the Washington Metropolitan Area Transit Authority about $21,000 per spot to build.

The delay and budget overruns prompted an investigation that found miscommunication and a lack of oversight, among other problems, plagued the project.

Eight months after the opening and six months after WMATA’s Office of the Inspector General released its report, the East Falls Church Metro Station has yet to enjoy its pre-COVID-19 popularity among cyclists. Still, bicycling advocates maintain that facilities like this one are needed, as bike theft is a common problem. They predict longtime commuters and a new batch of cycling enthusiasts will one day fill the spots.

“I’m not surprised there were few bikes parked when you visited,” said Bruce Wright, the president of Fairfax Alliance for Better Bicycling. “Much of the use of bike parking is by commuters, and almost no one is commuting. We’ll have to wait until after people return to work before getting an idea of how heavily the bike facility will be used.”

Based on how packed the station was with bicycles before the pandemic, Wright added, “I assume it will be very popular.”

As vaccination rates rise and restrictions lift in the D.C. area, more people appear willing to ride the Metro. According to WMATA’s COVID-19 data, this month’s ridership is up an average of nearly 240% over this time last year, when stay-at-home orders were still fresh. Still, Metro reports that overall, ridership remains down around 85% compared to pre-pandemic levels.

And it’s not just bike parking that is down. Vehicle parking at Metro lots in February was down 94% compared to 2020, just before the pandemic. 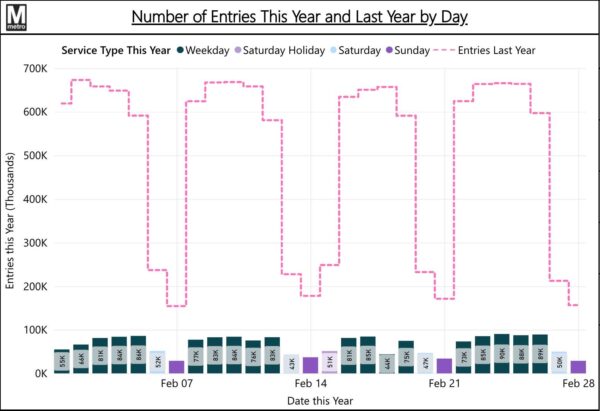 One way WMATA can measure cyclists’ interest in parking is through registration numbers. Metro requires users to register for the Bike & Ride facilities, which are accessed with a SmarTrip card. To date, more than 1,200 SmarTrip users have registered to use the Bike & Rides, which are also located at the College Park and Vienna Metro stations, said WMATA spokesman Ian Jannetta.

“Users don’t register to use a specific facility so I don’t have station-specific numbers, but I would expect the number to be relatively low since the two new facilities opened during this period of extremely low ridership,” he said. “We encourage anyone who wants to make biking part of their commute to utilize these secure facilities as the region continues its recovery and more people travel.”

The College Park Station facility, with 120 spots, opened in 2012. The 92-spot facility in Vienna — which was unfinished as of the Inspector General’s report — had a soft opening “late last year” and is now fully operational, Jannetta said.

One criticism may not be pandemic-related. Cranor said the East Falls Church parking area is farther away than other bike parking, and cyclists “may be deciding that it’s not worth it.”

“We may be learning about what cyclists value and it might be location over security,” he said.

Cranor lamented that the construction debacle “seems to reflect badly on cycling or the wisdom in investing in it,” since any project can be mismanaged.

Still, Wright remains hopeful — the pandemic led to a bicycle sales boom across the country, including in the D.C. area. That means more people who might consider a bike-assisted commute and more potential customers for the Metro bike lockers.

“I think jurisdictions need to do more to educate new cyclists, let them know about the facilities and encourage them to use biking for short trips,” Wright said.

According to the Inspector General’s report, three more Bike & Ride facilities are in the design phase. Thirteen other stations are slated to get facilities, but the program put in place in 2011 to install these facilities across the D.C. area is “being reassessed to determine its best path forward.”

Image (below) via WMATA