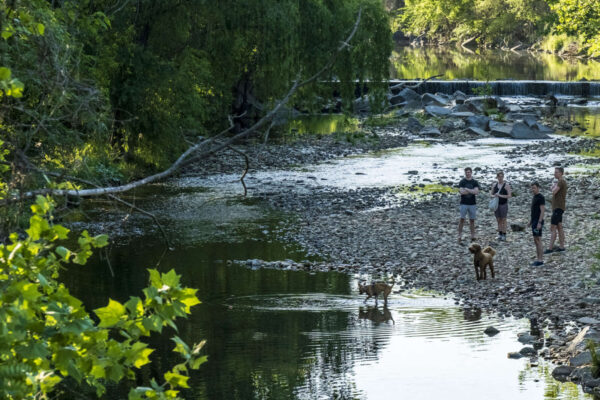 Redevelopment Proposal Near Rosslyn — “The Arlington Partnership for Affordable Housing (APAH) is moving forward with a proposal it previewed to redevelop part of the Marbella Apartments. APAH has filed a zoning application to replace 72 units across a pair of low-rise apartment buildings at 1300 and 1305 N. Pierce Street (map) with two 12-story buildings, delivering a total of 561 affordable units.” [UrbanTurf]

Vision Zero Plan Approved — “Arlington County Board approved a five-year Vision Zero action plan over the weekend, joining other jurisdictions throughout the region that are trying to curb traffic fatalities. The county’s goal is to reach zero traffic-related deaths and serious injuries by 2030. Currently, Arlington has about four traffic fatalities per year and about 55 severe crashes.” [GGWash, Sun Gazette]

Trump Aides Are Still Working in Arlington — “Taxpayers are still footing the bill for Donald Trump to pay aides, Business Insider reported Monday… For Trump, accepting public money has meant employing 10 transition aides in Palm Beach, Florida — where Trump has been living since he left the White House — and another seven aides in an office building in Arlington, Virginia.” [Raw Story]

Metrobus Service Changes Planned — Adjustments are coming to numerous Metrobus routes starting Sunday, June 6. Service is being restored to a number of routes, but one notable pandemic-era service reduction will stay in place: the 16Y, a limited-stop service route which once connected Columbia Pike stops to McPherson Square in D.C., will remain out of service. [WMATA]

Longtime Arlington Judge Honored — “Its presentation was due to the pandemic, but Arlington Circuit Court Chief Judge William Newman Jr. on May 11 was honored with the 2019 Harry L. Carrico Outstanding Career Service Award by the Judicial Council of Virginia. The award is presented annually to a Virginia jurist who has demonstrated exceptional leadership in court administration while exhibiting the traits of integrity, honest, courtesy, impartiality and wisdom.” [Sun Gazette]

YHS Dominating in Boys Lacrosse — “Pick one: Stingy defense; a potent, high-scoring offense; scads of talent, especially at midfield; depth and experience with 17 seniors; versatility; and a willingness to work hard, achieve and improve. That describes this season’s undefeated Yorktown Patriots high-schoolboys lacrosse team, which began the week with a dominating 6-0 record. The Patriots’ accomplishments include a shutout and outscoring opponents 96-18.” [Sun Gazette]