(Updated at 12:20 p.m.) New renderings from the National Landing Business Improvement District explore what Route 1 would look like if it were surface-level.

These images of protected bike lanes, pedestrian refuges and prominent crosswalks are part of a campaign the BID launched this week touting the benefits of transforming the highway — which is elevated over 12th, 15th and 18th streets — into an at-grade urban boulevard.

“People Before Cars” aims to advocate “for the implementation of best practices in urban street design and highway-to-boulevard conversions,” according to the BID.

The new campaign builds on “Reimagining Route 1,” a report it released last year envisioning the highway as a leafy, vibrant urban boulevard. Meanwhile, the Virginia Department of Transportation is wrapping up a study of how to improve the thoroughfare, which will likely involve making it surface-level.

“The improvement of Route 1 has been a huge priority for the collective community and was even featured in the historic negotiations that brought Amazon’s HQ2 to the area — further cementing its importance in the overall repositioning of National Landing,” said Jay Corbalis, Vice President of Public Affairs for JBG Smith, the largest property owner in the area.

More than half of Arlington residents surveyed by VDOT said Route 1 is not safe, easy or effective to use. About 45% of respondents said cyclists face dangers in the area and 64% want more protected bike lanes.

By 2040, conditions could be worse for drivers, who could experience heavy traffic at snail-like speeds during the morning rush hour, as the National Landing area and the region continues to grow, VDOT projects. Area employment by then is expected to double while the population is expected to grow nearly 50%.

The competing priorities of keeping traffic moving while making the corridor more attractive and safe is a tough balancing act for VDOT, and the BID is pushing a less car-centric approach.

“As our area experiences an influx of new residents and workers in the coming years — a population that is anticipated to favor walking and biking as means of transit over cars — we must do all we can to ensure that Route 1 can safely and effectively serve the needs of our growing community,” said Tracy Sayegh Gabriel, President and Executive Director of the National Landing BID.

Still, JBG Smith and the BID have raised concerns that VDOT still views Route 1 as a highway where drivers are prioritized, the Washington Business Journal reported, after the department previewed a vision of Route 1 that included nine at-grade vehicle lanes at the intersection with 15th Street S.

That worry is shared by some others, who also question whether crossing the road at-grade is safer than the current underpasses.

The trees and vaporware bike lanes are pretty, but this isn't safer than what's at 18th Street S now. It just isn't. Is that #VisionZero plan we passed on Saturday already shelved? pic.twitter.com/mmSs0Kgmfk

A group of civic associations, known as Livability 22202, has recommended taking Route 1 below ground instead.

VDOT is slated to issue a new report on possible improvements this summer. A virtual public meeting will be held Wednesday, June 16 at 6:30 p.m. 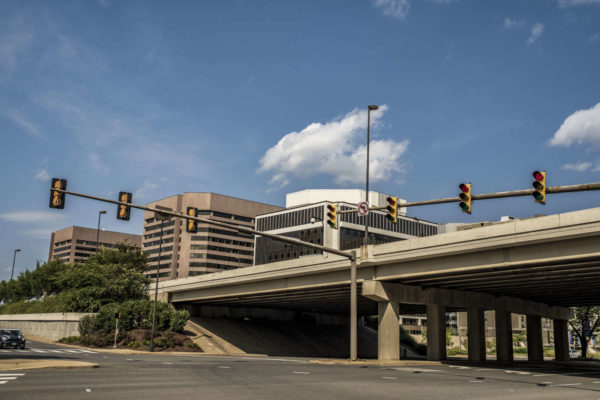