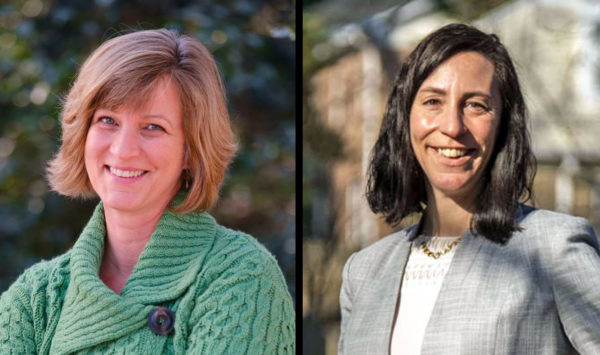 Mary Kadera has received the endorsement of the Arlington County Democratic Committee, following a caucus that was conducted online for the first time.

Kadera, the vice president of the Arlington County Council of PTAs, will now advance to the Nov. 2 general election to determine who will fill a seat currently held by School Board Chair Monique O’Grady. The chair announced in January that she will not seek re-election.

(School Board races are officially nonpartisan and parties can only endorse candidates, not nominate them as in a primary.)

“I am honored and humbled by voters’ faith in me to act in the best interest of all APS students, families, and staff,” Kadera said in a statement. “If elected to the School Board in November, I will work hard to rebuild relationships among APS leadership, the School Board, and the community as our schools fully reopen and we support our students’ academic, emotional, and social needs. I will work hard to earn the trust of communities of color as an ally in the fight for equity and justice.”

Due to the pandemic, Arlington Dems conducted voting online for the first time, although in-person voting was also an option. From last Monday, May 17, through Sunday, 6,207 ballots were cast for two Democratic school board candidates, Kadera and her opponent, attorney Miranda Turner. Kadera received 3,836 votes (~62%) and Turner got 2,368 votes (~38%).

The turnout set a local record, “exceeding the county caucus record of 5,972 votes, set in the 2017 School Board caucus,” the party noted in a press release.

“We congratulate Mary, and thank Miranda Turner for her willingness to step up to serve our community at this challenging time,” Arlington Dems School Board Endorsement Caucus Director Alexandra Zins said. We also thank outgoing School Board Member Monique O’Grady for her distinguished service.”

Turner tweeted out her response to the results last night (Monday).

It has been an honor to meet so many Arlington neighbors while campaigning for the endorsement. I will never forget your stories and your passion for your kids. My advocacy work doesn’t stop here. I will continue to speak up for students and push to have their needs prioritized.

More on Kadera, from the press release:

The current vice president of the Arlington County Council of PTAs and a mother of two middle school-aged children, Kadera has more than 25 years experience in pre-K through 12 education. She has served in a variety of roles, including as a middle school and high school teacher. Kadera also was the vice president for education at PBS, where she managed PBS’s portfolio of national digital education services and coordinated the educational initiatives of PBS and its local member stations. Currently an education non-profit leader, Kadera also led the McKinley Elementary School PTA for two years (2018-2020), where she stewarded her community through a challenging school move. During the pandemic, she organized volunteers to provide groceries, books and school supplies to families in need across Arlington.

Online voting was funded by a $59,000 grant from the nonprofit National Cybersecurity Center, which raises cyber awareness in the public and private sectors. Arlington Dems partnered with Democracy Live, which leadership described as the largest provider of mobile and cloud-based voting technologies in the U.S.

“We are pleased with the performance of the Democracy Live platform and grateful to the NCC for helping us to provide a safe voting option under the continuing pandemic conditions,” ACDC Chair Jill Caiazzo said.

Kadera will now face Mike Webb in the general election in the fall. Webb, a perennial candidate with a colorful history, filed paperwork for run for School Board, according to the county elections office.

Local Democratic leaders are urging Arlingtonians to vote in the upcoming June 8 primary election for local and statewide offices. Early voting has already started and is open until June 5 at three locations. On June 8, people can vote at their normal polling location.

The primary includes contests for governor, lieutenant governor, attorney general, the House of Delegates and the Arlington County Board. The winners will receive the Democratic nomination for the general election on Nov. 2.

For the County Board race, voters can choose whether to nominate Democratic incumbent Takis Karantonis or challenger Chanda Choun in a bid against independent Mike Cantwell.

“Virginia has the most competitive governor’s race in the country this year, and the Democratic majority in our state legislature also hangs in the balance. Virginia Democrats must rise — once again — to the challenge,” Caiazzo said.