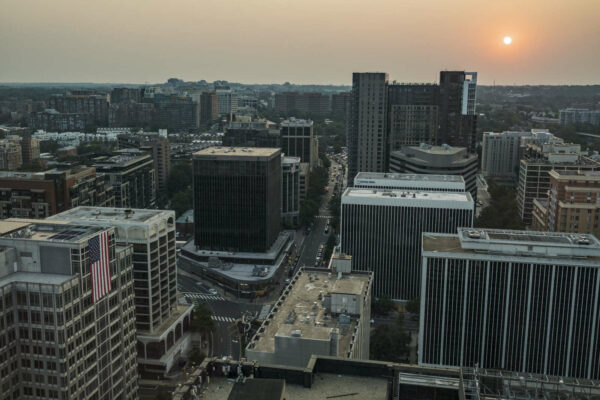 It’s the End of Summers — The former Summers restaurant in Courthouse was torn down yesterday, making way for a new apartment development. Video of the demolition shows water being sprayed to control dust as the building was razed. [Twitter]

Staffing Concerns At 911 Dispatch Center — “The head of Arlington, Virginia’s Emergency Communications Center is addressing concerns that its current setup is problematic and even potentially dangerous. ‘We are like every other 911 center in the country, which has traditionally struggled with staffing,’ center administrator Dave Mulholland told WTOP. ‘We’re going to be very honest in acknowledging not every shift has optimal staffing.’ However, Mulholland maintains that crucial positions have always remained filled, and that more people are being trained to fill needed roles.” [WTOP]

Lebanese Taverna Helping to Feed Refugees — “When word came that thousands of Afghan refugees would be landing at Dulles in late August after their country fell to the Taliban, World Central Kitchen mobilized to make sure those reaching the U.S. after a harrowing journey would be greeted with a hot meal. The nonprofit’s first call was to Grace Abi-Najm Shea, one of five siblings behind Lebanese Taverna… Of the 61,298 meals WCK served there between Aug. 25 and Sept. 10, 5,037 came from Lebanese Taverna.” [Washington City Paper]

County Board May Modify Hotel Tax — “Arlington County is weighing whether to tax hotel guests for the total cost of their stay, including fees and other charges, and not just the cost of the room. The potential change to the transient occupancy tax — the revenue from which has collapsed amid the pandemic, affecting Arlington’s incentive arrangement with Amazon.com Inc. — follows changes to the tax definition in the state code adopted by the Virginia General Assembly.” [Washington Business Journal]

Much of Crystal City Is Now Carbon Neutral — “JBG SMITH, a leading owner and developer of high-quality, mixed-use properties in the Washington, DC market, today announced it has achieved carbon neutrality across its entire 16.1 million square foot operating portfolio. Building on this accomplishment, JBG SMITH intends for its properties to maintain carbon neutral operations annually.” [BusinessWire]

Tucker Rants About Beyer — Fox News opinion host Tucker Carlson called Rep. Don Beyer “a fashionably radical car dealer from Arlington” on his show earlier this week, in a segment about vaccine mandates. But Beyer’s communications director says that the local congressman, who is actually an Alexandria resident, “does not own any auto dealerships and has not for years.” [Twitter]

Harris Teeter Stores Cutting Hours — “Harris Teeter stores nationwide will be reducing their store hours until further notice, citing the shortage of labor caused by the COVID-19 pandemic… Starting Wednesday, Sept. 15, all Harris Teeters will be open from 6 a.m. to 9 p.m. Stores in Northern Virginia have previously been open 24 hours, or until 11 p.m.” [InsideNova]