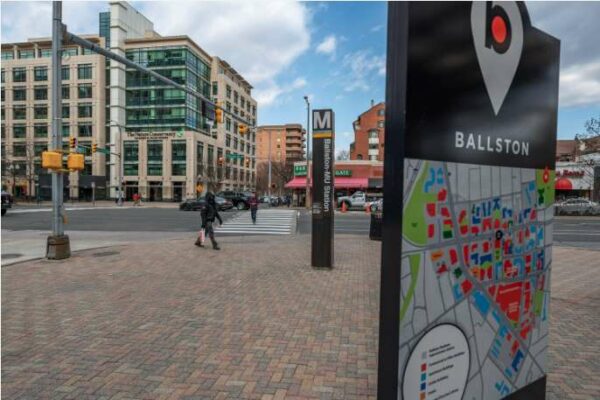 Arlington County is applying for an $80 million grant to help pay for a proposed west entrance to the Ballston Metro station.

On Saturday, the County Board authorized the application to the Northern Virginia Transportation Authority (NVTA), which helped cover the cost to develop designs for the second Metro entrance in 2016.

The entrance would be located at N. Fairfax Drive and N. Vermont Street, almost a quarter of a mile west of the existing entrance. A county report says the second entrance would greatly expand multimodal access to the station and provide greater capacity to, and efficiency for, Metro.

As part of the proposal, the county would build two street-level elevators and stairs connecting to an underground passageway, the report said. A new mezzanine with stairs and elevators would connect riders to the train platform.

“This is an economic development application in addition to a transportation step,” Board Chair Matt de Ferranti said in the Saturday meeting. “This is a very important step as we continue to plan smart and build well for our community and future.”

The county unsuccessfully asked NVTA for $33.5 million for the project in 2019.

New cost estimates are firmer, and higher, than the 2019 proposal, according the report. The project is expected to cost $140 million, an increase of $10 million from 2019.

Rising costs can be attributed to inflation and having more detailed plans, the report said.

“The County’s funding plan for Ballston West Entrance has shifted since the onset of the COVID-19 pandemic and its associated impacts to local, regional, and state funding,” the county said.

In addition, the county is no longer relying on two additional funding sources that were both hit by the pandemic: Northern Virginia Transportation Commission’s (NVTC) I-66 Commuter Choice Program or the Virginia Department of Rail and Public Transportation.

NVTC grant funds are generated by toll revenues from I-66 inside the Beltway, which is down due to COVID-19, while the state rail department is focusing its resources on helping with transit maintenance and replacement projects.

“Therefore, a proportion of planned project funding for the Ballston West Entrance now unrealized from DRPT and NVTC is now being covered by the County’s application to the NVTA,” the county said.

The rising costs dismayed members of the Transportation Commission, according to a letter from Commission Chair Chris Slatt.

“While supportive of this project, multiple commissioners expressed great concern about the ballooning cost of these Metrorail second entrance projects and the large opportunity cost it presents,” Slatt said. “It is hard not to think about the other transportation projects that could be built for $140 million that would potentially move more people. That would build a lot of sidewalks, protected bike lanes or dedicated bus lanes.”

Arlington County plans to put the project into its next 10-year Capital Improvement Plan, which would begin in the 2022-23 fiscal year.

If approved, the grant and other regional transportation projects will be included in NVTA’s 2022-27 Six Year Program Update. The authority is slated to take action on that update, which will also have a schedule for each project, next July.

END_OF_DOCUMENT_TOKEN_TO_BE_REPLACED

More Stories
Poll: Did this morning’s Metro mess affect your commute?Here are some of Arlington’s proposed priorities for the upcoming state legislative session