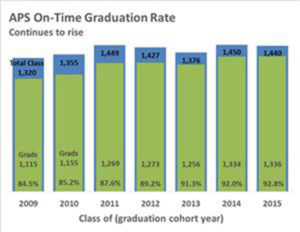 The on-time graduation rate for Arlington Public Schools has continued to rise, topping Virginia’s average by more than 2 percent.

The class of 2015 had a 92.8 percent graduation rate, 0.8 percent higher than the previous year. The on-time graduation rate has increased 8.1 percent over the past six years, according to APS.

The rate is 2.3 percent higher than the state average of 90.5 percent, APS said.

“The increases in the on-time graduation rate and the proportions of graduates earning advanced diplomas is notable given the more strenuous requirements for earning a diploma in Virginia,” APS said in a press release.

Students receiving diplomas this year had to complete an economic and personal finance course, the first time Virginia had this requirement.

“The students who graduated in May and June began high school just as the commonwealth was introducing challenging, new assessments in mathematics, English and science,” Superintendent of Public Instruction Steven Staples said in a statement. 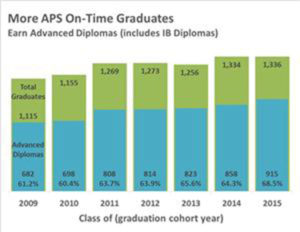 Of the students who graduated this year, 68.5 percent of them graduated with an advanced or International Baccalaureate diploma, 17 percent higher than the state average of 51.5 percent. The average number of students graduating with advanced or IB diplomas has also increased 7.3 percent over the past six years, from 61.2 percent in 2009.

“While I am pleased that our graduation rates have continued to rise, I am especially excited to see that more and more of our students also have challenged themselves to earn advanced or IB diplomas. This expands the options for their academic and personal pursuits after graduation,” said APS Superintendent Patrick Murphy.

While graduation and advanced diploma rates have increased, the number of students dropping out of school increased, as well. The rate jumped up from 3.8 percent in 2014 to 4.2 percent in 2015.

Although the rate increased, the dropout rate has decreased since 2009, when the rate was 11.9 percent. The rate is under the Virginia average of 5.2 percent. 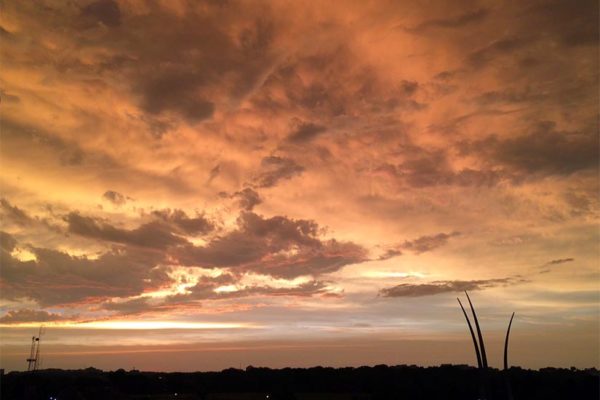 Police Foot Chase in Pentagon City — Last night, after the Pentagon City mall was evacuated due to a power outage, mall security spotted two men lingering and entering closed stores. Police were given a lookout and one of the alleged suspects was spotted outside the mall. A foot chase ensured and the man was apprehended behind nearby Pentagon Row. No word yet on any changes.

Economic Chief Has a Plan For Arlington — New Arlington Economic Development Director Victor Hoskins says he has a plan for economic growth in the county that will reduce the county’s office vacancy rate from the current 21 percent to 10 percent over the next six years. The plan includes “a mix of much more aggressive marketing efforts, incentives and other government aid, and the help of ‘frenemies’ in competing local governments such as the District and Alexandria.” [Washington Business Journal] 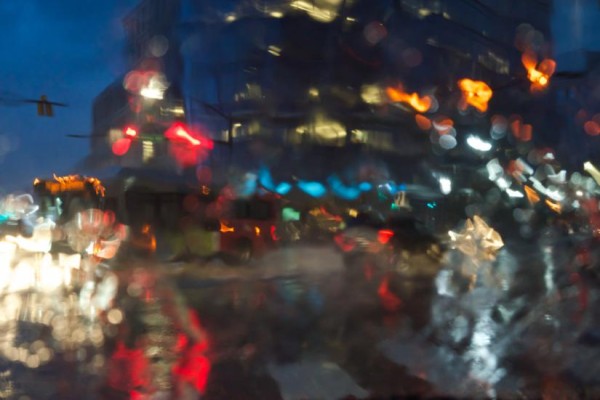 APS Graduation Rate Rises to 92 Percent — Arlington Public Schools’ graduation rate rose to 92 percent for the Class of 2014, up from 85.2 percent in 2010. The dropout rate declined to 3.8 percent this year and the graduation rate for Arlington’s three comprehensive high schools reached 98.7 percent. “This steady improvement is a reflection of the teamwork of everyone working together to ensure that our students succeed,” said Superintendent Dr. Patrick Murphy, in a statement. [Arlington Public Schools]

Company Promises In-N-Out Delivery — As a publicity stunt, food delivery service OrderAhead is offering to deliver frozen In-N-Out Double Double burgers from California today to addresses Arlington and D.C. Even though In-N-Out is famous for food that’s never frozen or pre-packaged, the offer is apparently proving popular for those with a craving for the west coast chain. Currently, a website set up to provide more information about the promotion is down. [Eater]

This article was written by Audrey Batcheller

With college move-in dates right around the corner, many members of Arlington’s high school graduating class of 2013 are moving out of Arlington for the first time in their lives.

Whether they’ve spent the past 18 years in the county or have just been around for high school, these young adults have unique perspectives on life in Arlington.

Devon Brown, a lifelong Arlingtonian, will be attending Wake Forest University this year and has mixed feelings about leaving Arlington.

“Recently I’ve felt like the only option when going out with friends to do something is getting something to eat,” said Brown.

Nicole Collantes, an upcoming Radford University freshman, disagrees with Brown on that point.

“It’s their own fault if people are bored,” she said. “Around Arlington, there are so many places to go to and shop. Also, there’s always an art or music festival going on if you know where to look. And even if people don’t think there’s anything to do around here, the metro takes you all around D.C., where there’s even more things to do.”

Alec Schadelbauer, who will be a freshman at Virginia Tech, said he stayed active in Arlington through volunteerism.

“There are so many ways to get involved in the community through leadership and service,” said Schadelbauer. “The Leadership Arlington Youth Program was one of the best experiences of my life so far.”

The county’s proximity to Washington, D.C., has been the best part of the Arlington experience to many students. Justin Snow and Maggie Burgos, who will be attending George Mason University and Colby College in Maine respectively, have taken advantage of living near the political hub of the country.

“Growing up near D.C. has helped me have opportunities to see government happen,” said Burgos, who went to President Obama’s first inauguration and hopes to work on Capitol Hill.

Snow interned on Capitol Hill and said he and other local high school students “[have] access to a lot of things that other [areas] don’t.”

As privileged as all its graduates feel about being able to live in Arlington, a few common criticisms arose among the students: the traffic, the dreaded “Arlington Bubble,” and the weather.

END_OF_DOCUMENT_TOKEN_TO_BE_REPLACED

Gondola From Rosslyn to Georgetown? — The Georgetown Business Improvement District has floated the idea of running a gondola from Georgetown to Rosslyn in order to make it easier Metro riders to shop and dine in the D.C. neighborhood. Georgetown businesses are worried about competition from other, more trendy neighborhoods. [Washington Post]

High School Graduation Recap — The Sun Gazette has published recaps of each of the three Arlington public high school graduation ceremonies last week. According to the paper, Washington-Lee grads were “encouraged to reach for the stars, stay true to beliefs;” Yorktown grads were “urged to embrace challenges, take setbacks in strides;” and Wakefield grads were “urged to build on the past to create the future.”

Today is the last day of school for high school students at Arlington Public Schools.

Commencement ceremonies will be held for APS high schools on Thursday, at DAR Constitution Hall in the District. The graduation for Washington-Lee will be held at 10:00 a.m., Yorktown at 3:00 p.m. and Wakefield at 8:00 p.m. Each ceremony will be broadcast live on the APS website, on Comcast channel 70 and Verizon FiOS channel 41.

A listing of other APS graduation events, including middle school graduations, is available here.

Board Approves New Hotel — On Saturday, the Arlington County Board approved a new 168-room hotel on the former Colony House furniture site at 1700 Lee Highway. As part of the site plan approval, developer B.F. Saul agreed to make a $510,000 contribution to the county’s affordable housing fund, $62,546 to the utility undergrounding fund, $75,000 to the public art fund and $70,000 to pay for a widened sidewalk on a portion of N. Quinn Street. [Arlington County]

Diener Murder Case In-Depth — Writer Kris Coronado takes an in-depth look at how Arlington County police cracked the Carl Diener murder case, including how a hunch and DNA evidence played a pivotal role, and how one of the suspects rapped about the case against him. [Arlington Magazine]

Airfare Drops at DCA — The average roundtrip airfare at Reagan National Airport was $370 in 2012. That’s down 4.6 percent from a year prior and down 20.1 percent compared to the year 2000. [Sun Gazette]

AHC Seniors Headed to College — All 11 high school seniors in the AHC Inc. Teen Program graduated this year and are going to college. “Many are the first in their family to achieve this milestone,” said Celia Slater, communications director for the Arlington-based affordable housing developer. “Together, the group earned more than $20,000 in scholarships”. The students’ families are from 9 different countries. [AHC Inc.] 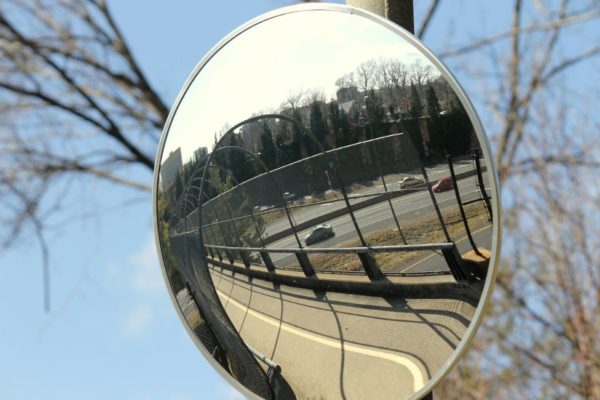 Va. Budget Standoff — There’s a standoff in Richmond as the 20 Republicans and 20 Democrats in the state Senate remain evenly divided over the state’s two-year budget. Democrats say their opposition stems from the budget’s inadequate funding for public education, transportation and health care. Republicans, meanwhile, are accusing Democrats of obstructionism and “Washingtonian behavior.” The budget needs at least 21 votes to pass. The last vote was 20-19. [Washington Post, Washington Times]

High School Graduation Date Moved — The graduation date for Arlington public high schools is now Wednesday, June 20. The date was switched from the 21st because the graduation venue, DAR Constitution Hall, was not available that day. The last day of school was also moved back a day, to Tuesday, June 19. [Arlington Public Schools]

Arlington Au Pair Recognized — An au pair from Arlington has been named the winner of the national ‘Ultimate Au Pair’ contest. AuPairCare, an agency that places international au pairs with host families in the U.S., says they selected Mariana Moujan, of Buenos Aires, as the Ultimate Au Pair “for her compassion and dedication to the Edwards family in Arlington, Virginia.” 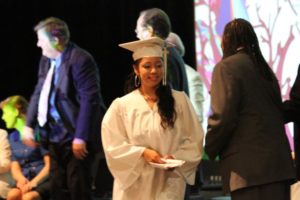 “Our journey has not been easy, but somehow we’ve overcome the obstacles in our way.”

Newly-minted high school graduate Rachel Wilburn was a two-time high school dropout with a kid and another on the way when she entered the Langston High School Continuation Program. This morning, she was given the honor of addressing about 150 fellow Langston and Arlington Mill high school continuation graduates at the Washington-Lee auditorium.

“Despite everything that has come our way, there is a voice in our unconscious minds that said ‘I will not give up on myself,’” she said. “I thank God for giving us the strength to make it through this.”

Wilburn credited her parents, her husband and her parents-in-law with helping her to find Langston and make it through the teen parenting program. With their support, she even achieved perfect attendance in her third trimester.

Wilburn said she now plans to attend college to study business and human resource, so that she can give her kids “the best possible future.” 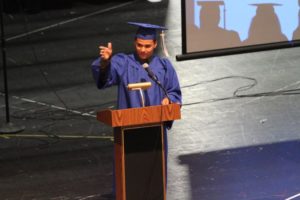 “I’m a wife and a mother of two amazing children who I can’t see my life without,” she said. “This program is such a blessing.”

For Arlington Mill graduate Joel Diaz, who turned 21 today, going back to high school in his 20s was “embarrassing.” But, he said, he was able to overcome that initial trepidation and thrive.

“After I began going to Arlington Mill… I realized that a lot of us, we’re just different. We all have different stories, we’re all on different paths, we all have different goals,” he said. “Going through this has made me a stronger person. Our paths do not have to define our future.”

“I have been waiting for this day so long,” Diaz continued. “I hope you realize that this is not the end but the beginning.”

More photos, after the jump. END_OF_DOCUMENT_TOKEN_TO_BE_REPLACED