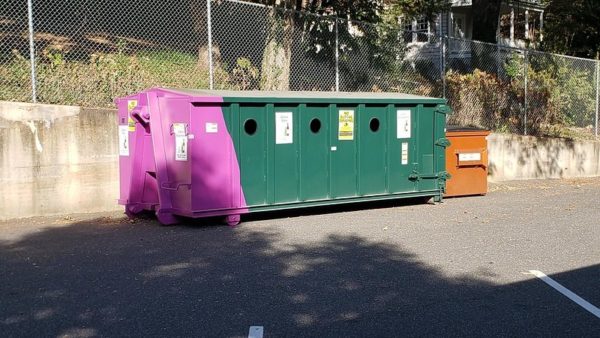 One of Arlington’s glass recycling bins is being moved to improve access to those in the far northern reaches of the county.

The drop-off bin in the Cherrydale library parking lot, which has been there since last fall, is being moved to the Madison Community Center  (3829 N. Stafford Street) later this week.

The county’s other purple glass drop-off bins are located at:

Glass was removed from Arlington’s curbside recycling collections last year, but residents have flocked to the bins in order to keep their bottles and jars out of landfills.

“In just a year, our community has recycled over 2 million pounds of glass and we hope to continue the success of the program together,” the county said.

Much of the glass collected by the bins is sent to Fairfax County to be crushed and used as construction material, but some has been sent to a processing plant and turned into new glass products.

A modern-looking plaque across the street from the Madison Community Center and Fort Ethan Allen Park is sporting some seriously outdated lingo.

Of particular interest is the phrase “War of Northern Aggression.” It’s safe to say that this term, used by some southerners to refer to the Civil War, has been out of favor in Arlington for some time.

The plaque is attached to a large stone on the corner of N. Richmond and Stafford streets, near where the fort once stood. Behind it is a small but lush green space, surrounded by a wood rail fence. But “the Sanctuary,” according to neighbors, is the name a housing developer gave to the homes he built in the area.

Other locals also find the terminology out of place.

“I thought this plaque… was rather odd,” said a tipster who emailed ARLnow.com. “While I recognize that Virginia seceded at the Civil War, a modern-day reference to the ‘War of Northern Aggression’ (at the site of a Union fort) strikes me as somewhat peculiar.”

Officials we talked to said they are not sure of the story behind the plaque.

The Arlington County Historic Preservation program, Arlington Public Schools, the Arlington Department of Parks and Recreation, and even the people at the Madison Community Center — none knew anything about the plaque. Arlington historic preservation officials said the plaque does not belong to the county and they had no record of its installation.

Update at 5:05 p.m. — Commenter AnonymousArlingtonian linked to a 2011 Arlington Connection article that points to Preston Caruthers as the plaque’s builder. The plaque also was mentioned in a Falls Church News-Press column in 2011, but the author of that column, Charlie Clark, told us today he doesn’t believe Caruthers installed it.

Update at 6:45 p.m. on July 24 — Clark has updated his previous assertion, saying he has since confirmed the plaque was indeed installed by Caruthers.

Update at 9:50 a.m. on July 25 — Falls Church News-Press columnist and Arlington history enthusiast Charlie Clark has walked back his earlier statement on who wrote the three-decade-old plaque mentioning the “war of northern aggression” that is on display on private property on N. Stafford Street at the Madison Center and Fort Ethan Allen.

Clark over the weekend contacted the Caruthers family and learned that it was indeed developer Preston Caruthers who created the sign, which the family has long seen as a humorous way to get people’s attention. Here is Caruthers’ statement to Clark:

“Thank you for the concern about some my friends and good neighbors’ attention to our sanctuary street sign. It was never intended to be offensive in any way, but rather to point out to citizens and visitors the sad history of our area during the Civil War. The plaque and statues on the school playground provide so little attention to this sad era of our community’s history. I’m very sorry if this has ever offended anyone.”

Arlington County Manager Barbara Donnellan says she and her staff will be evaluating several county facilities for possible changes or closure next year.

Among those expected to be evaluated are the money-losing Artisphere, two community centers and two Department of Human Services facilities.

In her budget message to the County Board, Donnellan said “potential facilities to be evaluated” include the Madison and Woodmont community centers in north Arlington, the Edison Complex near Virginia Hospital Center, and the Fenwick Center on S. Walter Reed Drive.

“As our population changes and as technology changes the way we deliver services, I believe we have many opportunities to do things differently, particularly in the area of buildings and facilities,” Donnellan said. “I have asked staff to begin evaluation of some of our facilities that require significant capital investment or are underutilized — with one of our initial tasks being how we engage the community and stakeholders in these discussions.”

Possible recommendations for the facilities could include changes in use or closure, said Arlington County spokeswoman Mary Curtius.

“The evaluations will look at a full range of options, including no change in use, repurposing these facilities for a new use (County or otherwise), or potentially closure — but it’s preliminary to speculate until the process is complete,” she said. “As the Manager’s message noted, one of the initial starting points will be to get public input — and other evaluation factors will include utilization rates and building condition and age, among others.”

Also on the chopping block is Artisphere, the Rosslyn-based cultural center that opened with high expectations in 2010. As previously reported, Donnellan is including $1.8 million in taxpayer funding for Artisphere in her proposed FY 2014 budget, but warning that she’s “assessing its performance and programming model” for next year.

“We’re going to evaluate the fiscal sustainability,” she told County Board members on Wednesday. “I’m forcing them to reevaluate how they operate. It’s an expensive operation to continue and I need to evaluate it to make sure it’s sustainable.” 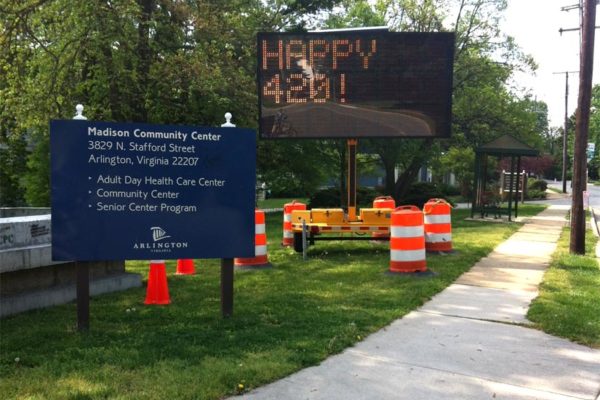 A road sign in North Arlington is wishing everyone who drives or walks by a “Happy 420.”

The greeting, on a day that is closely associated with cannabis culture, was likely the result of the same sort of electronic road sign hack that pranksters have used to warn of “Zombies Ahead” or “The British Are Coming.”

A tipster tells us the sign, which is located outside the Madison Community Center on Old Glebe Road, was originally advising drivers of road closures due to water main work nearby.

The Arlington branch of the YMCA is planning a haunted house later this month.

The kid-oriented event is will be held at the Madison Community Center (3829 N. Stafford Street). It will feature ghost stories, Halloween treats, ghoulish games, and other spooky fun.

Tickets cost $5 per person, with $5 off for families of four or more. Proceeds go to the Y’s summer camp and after school mentoring programs.