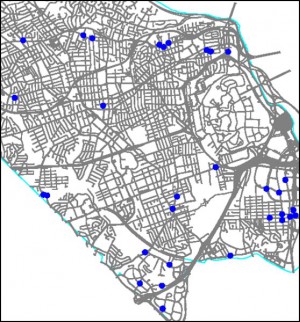 While Columbia Pike will be getting its first of two dozen planned “Super Stop” bus shelters later this year, more modest improvements are in the works for 31 other bus shelters around the county (see map, left).

This weekend the Arlington County Board is expected to approve a nearly $400,000 contract to upgrade bus stops in various “County designated high-priority zones.”

“Improvements include improved crossings, curb ramps, the addition or replacement of bus shelters, benches and trash receptacles, the addition or upgrade of existing sidewalks, and landscaping,” according to the board report. “As the construction progresses, periodic traffic restrictions may be required upon roadways in the vicinity of the active construction zone.”

The project is being fully paid for with state and federal funds. A second, more limited phase of the project is expected to follow the current contract.