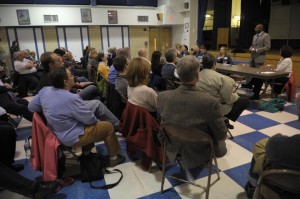 The six candidates for County Board each struck a note of fiscal conservatism at local civic association debates this week.

Even as Arlington has avoided the worst of the stagnant economy, fears about the impact of federal spending cuts on Arlington’s tax base, combined with the reality of a burgeoning school population, has ushered in a slate of candidates largely devoid of ideas for sweeping new county initiatives. Instead, candidates are talking about prioritizing spending and, perhaps, pulling back on big ticket items like the struggling Artisphere cultural center and the planned Columbia Pike streetcar and Long Bridge Park aquatics center.

Iraq veteran and West Point graduate Terron Sims was perhaps the most blunt of the five Democrats in race when it came to spending. 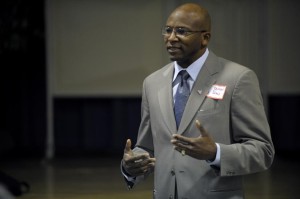 “We do need to prioritize,” Sims said. “We spend money as though it’s coming out of trees… Though we have the money, that doesn’t necessarily mean we have to spend the money.”

“I’m disturbed at the trolley’s cost,” Sims said of the Pike streetcar’s $250 million price tag. “As for the Artisphere, it’s a failed investment, or at least it appears to be at this time.”

Peter Fallon, an Arlington County Planning Commission, was also candid about his views on spending — particularly when it comes to the streetcar.

“Let’s face it, we need to do a much better job of deciding what we need versus what we want and what we can have,” Fallon said. “I am certainly very pro-transit… however, I am not convinced that $250 million for a five mile rail in the ground is necessarily the way to go.

“If I’m on the County Board, I’m not going to sign off on it until I’m convinced it’s the right thing to do for all of Arlington, and I have not seen that analysis yet,” Fallon added. “There are cheaper ways to enhance traffic and transit throughout Arlington County.” 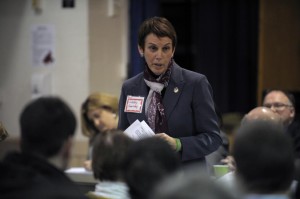 School Board member Libby Garvey said that some big ticket items sound good in theory, but must be put in perspective when it comes to other needs.

“I think the streetcar sounds like a great project, I think the [proposed Long Bridge Park] aquatics center sounds like a great project, the Artisphere had really good possibilities — they all sound great,” she said. “Meanwhile, our schools are busting at the seams, our police force has not had an increase in 10 years. There are a lot of issues we are facing, and the news is we cannot do it all — or we cannot do it all right now.”

“We need a strategic plan to pick out what our priorities are and decide what we’re going to do first,” Garvey continued. “So if we put money into an aquatics center but we don’t build a school, we’re saying that the aquatics center is more important than a school. Our budget statements are value statements.” 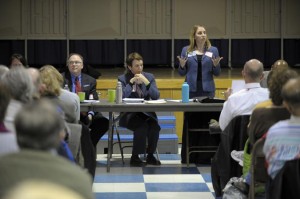 Kim Klingler, a Democratic activist and a senior manager at a large consulting firm, said she would bring her “private business perspective” to the County Board if elected. Klingler said the Board needs to “prioritize and spend wisely.”

“This may not be the time” for the Long Bridge Park aquatics center, she said, adding a . “That doesn’t mean there isn’t a time, but maybe not today with our capital maintenance and school needs.”

Klingler also expressed skepticism about the Columbia Pike streetcar project, but did not outline any specific action she would take if elected.

Melissa Bondi, who has expressed support for the streetcar, said that the county must be thoughtful in deciding how to invest taxpayer funds.

“All of us need to be very vigilant in looking at how we invest resources so that it will be used well,” she said.

Bondi said Artisphere was a victim of a failed planning process that did not seek enough input from the community or from those with economic and cultural expertise. 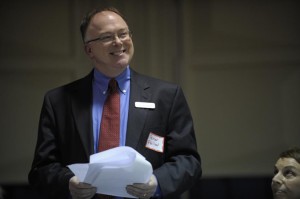 “The people weren’t there. It might have worked if you could have dropped the Artisphere in Clarendon,” he said. “They need to hire a non-profit arts group to actually manage the thing.”

Audrey Clement, a Green Party member who’s currently the lone candidate in the race who’s not a Democrat, continued to hammer away at Arlington’s “vanity projects” — as she has done in past races. 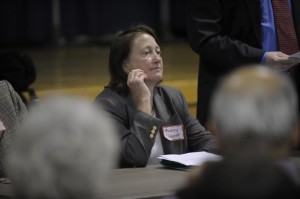 “The county has cut social safety net programs by approximately 10-15 percent over the past three years,” Clement noted. “One way we can refund those programs is to stop spending money on vanity projects.”

Clement was also skeptical of the $10 million price tag of the county’s proposed year-round homeless shelter.

“I definitely want to provide year-round housing to the homeless, but at a reasonable cost,” she said.

Clement did, however, suggest some new spending priorities, including keeping branch libraries open sevens days a week instead of five, repaving local roads, and hiring 4-6 county inspectors to investigate recycling compliance at apartment and office buildings.