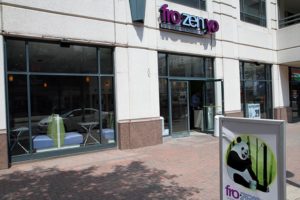 A new frozen yogurt store has opened in Ballston.

The store is open from 10:00 a.m. to 11:00 p.m. Sunday through Thursday, and 10:00 a.m. to midnight Friday and Saturday. We’re told the store is in the process of applying for an outdoor seating permit.

The store is owned by Kevin Grevey, Jr. and his father, retired NBA star Kevin Grevey. Grevey played for the Washington Bullets from 1975 to 1983 and helped the Bullets (now the Wizards) win their only NBA championship.

The junior Grevey tells ARLnow.com that he’s currently working on a lease for a FroZenYo store in Rosslyn. He’s also exploring the possibility of opening a store in Clarendon.