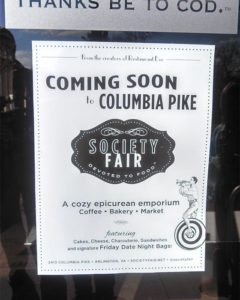 After a year and a half of struggling with slow lunch and dinner business, Eamonn’s on Columbia Pike will be trying to capitalize on breakfast business by relaunching as “Society Fair.”

The restaurant at 2413 Columbia Pike opened as Eamonn’s and TNT Bar in August 2012. While the sit-down fried fish restaurant is popular in Alexandria, it never quite attracted the crowds needed to sustain the business on the Pike, we’re told. Instead of closing, over the next month owner EatGoodFood Group will transition from Eamonn’s to a second location of its “Society Fair” bakery, cafe, market and eatery, which is also popular in Alexandria.

Already, couches have replaced some tables and chairs, to give the space a more “warm and comfortable” vibe. More furniture changes are in the works, and curtains will be installed, at least in part to dampen noise. The hope is to become more of a neighborhood hangout, a formula that has worked for nearby William Jeffrey’s Tavern, the biggest success so far on a block of restaurants that are mostly treading water business-wise, thanks to virtually non-existent lunch business.

By mid-February, the restaurant is expected to begin opening at 7:00 a.m. to serve breakfast customers with coffee, espresso drinks and pastries made fresh at the original Alexandria location. At other times of the day the food offerings will be more of the small plates variety, plus paninis, charcuterie, cheese and salads.

TNT Bar will remain and will serve drinks every night of the week, we’re told, but will continue adding more affordable cocktail options. With the exception of perhaps a few lunchtime closures, Eamonn’s will remain open as the space is gradually transformed.

The Washington Post’s Tom Sietsema reports that fish and chips will remain on the menu once the Society Fair transition is complete.