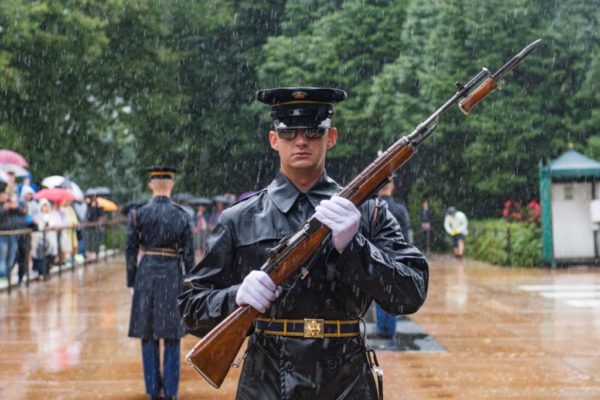 Everyday Heroes in Our Midst — On Wednesday morning, a grounds crew working outside the Clarendon Metro took some time out to help a disabled man to the bus stop. “Hey @ArlingtonDES @ArlingtonVA, a little late here but please forgive your grounds crew working near the #Clarendon metro this morning if they were running a little late,” said the Twitter user who witnessed the encounter and snapped a photo. [Twitter]

Body Found in Water Near Memorial Bridge — “D.C. police have recovered a body found Thursday morning in the Potomac River near Arlington Memorial Bridge, near the Lincoln Memorial, according to a department spokeswoman.” [Washington Post]

Glass to Be Removed from Recycling List? — “The county government appears on the verge of eliminating collection of glass as recyclable material and directing residents to instead dump it in their regular trash bins… currently, there is a ‘negative market value’ for glass, County Manager Mark Schwartz told board members, and because it’s difficult for processors to recycle glass products, most of it ends up being destroyed like regular trash anyway – either to a landfill or to be incinerated.” [InsideNova]

County May Reopen Exit for DCA Rideshare Drivers — “Arlington County officials have offered a solution to the gridlock caused by rideshare drivers moved to a parking lot between Jefferson Davis Highway and South Eads Street: Reopening an exit at 27th Street, which would allow rideshare drivers accepting passengers to quickly leave the lot and turn onto the nearby airport access road.” [WTOP]

Cosplay Event at Library — “Join Maker and cosplayer Dylan Smith as he discusses how he’s incorporated 3D printing into cosplay, what materials he’s used, and how you can get started. This event is designed for adults and teens in grades 6+.” [Arlington County]

Hungry Donates Thousands of Meals — HUNGRY, an Arlington-based food startup, “has donated funds equivalent to more than 70,000 meals to Washington, D.C.-area and Philadelphia-area food assistance centers, including Feeding America and the Arlington Food Assistance Center (AFAC). HUNGRY donates funds equivalent to one meal for every two purchased to those in need via its ‘Fight Against Hunger’ program.” [PRWeb]