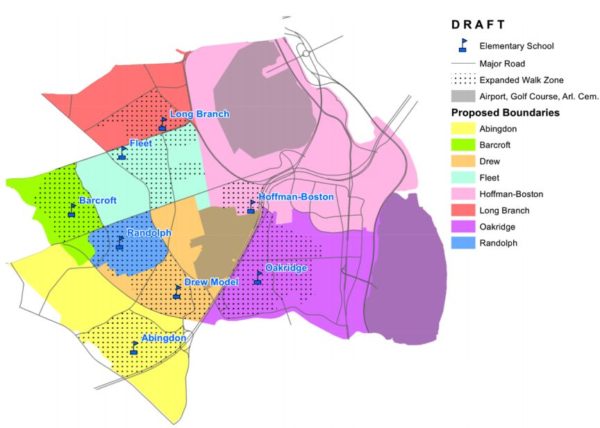 Superintendent Patrick Murphy has revealed his final proposal for new elementary school boundaries to forward along to the School Board, with a new map designed to simultaneously the answer the concerns of some Fairlington parents and reduce overcrowding at Barcroft Elementary.

Arlington Public Schools officials have spent months drawing up map after map to guide attendance boundaries at eight South Arlington elementary schools set to go into effect next fall. Each one has prompted fresh rounds of concern among parents nervous about seeing their kids moved to different schools, as the school system prepares to open up the new Alice West Fleet Elementary next year.

Perhaps most notably, the proposal keeps the entirety of the Fairlington community within Abingdon’s attendance boundaries, rather than sending some students in South Fairlington neighborhoods to Drew Model School. Parents from across Fairlington vigorously protested previous proposals to do so, arguing that it would unnecessarily split up the community and require plenty of busing to help students reach Drew.

School officials worked up a map last week to leave Abingdon’s boundaries unchanged, but that proposal would’ve left both Drew and Fleet with far fewer students than the buildings are designed to hold. Meanwhile, Barcroft, in particular, would’ve remained substantially over its capacity.

Murphy’s new map would move 100 students out of the school, reducing it from being at 149 percent of its capacity next year to 120 percent. Randolph would also see a slight decrease of about 40 students, and Drew and Fleet would absorb most of the students from those schools.

Neighborhoods just off Columbia Pike would be primarily impacted by the change, with a cluster of streets behind the Walter Reed Community Center and others around Alcova Heights Park all moving to Fleet.

Next year, Drew will see hundreds of students leave the building, as the Montessori program moves to Patrick Henry Elementary. Yet parents there worried the school system’s initial plans would involve unfairly packing the school with students from low-income families, as measured by the percent of the student body eligible for free and reduced price lunch.

Murphy’s proposal would mean that about 56 percent of the school’s population would be FRL-eligible, down slightly from the 60 percent figure that officials initially proposed. Of the eight schools included in the process, only three will have more than 50 percent of the student bodies eligible for free and reduced price lunch, the school system’s target benchmark throughout the boundary process.

The School Board will get its first look at the superintendent’s boundary proposal at its meeting Thursday (Nov. 8), with a public hearing set for Nov. 27. The Board plans to pass a final map by Dec. 6, and could make plenty of changes to Murphy’s proposal between now and then.