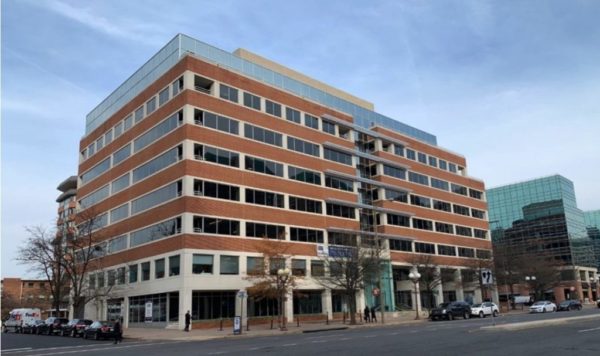 A Ballston office building that’s sat largely empty ever since a federal agency moved out a few years back could soon lure a bevy of new tenants to the space.

The Arlington Square building, located at 4401 Fairfax Drive, looks set to experience a bit of a revitalization. The County Board is set to consider a series of zoning changes for the property tomorrow (Saturday) to lure in two tenants, and other retailers look to be on the way as well.

Built in 1988, the eight-story building was long the headquarters of the U.S. Fish and Wildlife Service. But the agency took off for Falls Church in 2014, as part of a series of federal tenants leaving the area, and the building has been “mostly vacant” since then, county staff wrote in a report to the Board.

The Brookfield Property Group bought Arlington Square for $33.5 million back in 2017, paying substantially less than its previous owner did in acquiring it for $53.9 million in 2010, according to county property records. The developer now “intends to attract a variety of uses and tenants to occupy the building,” staff wrote.

Specifically, the building’s owner is looking for a zoning change in order to lease out about 2,800 square feet of space on its ground floor to a “private college.” The Board report doesn’t name the institution looking to move into the space, but it does say that it will offer classes on nights and weekends, with “degrees in a Master of Business Administration, Bachelors of Science in Business, Bachelors of Science in Information Technology and general studies and electives programs.”

A behavioral therapy provider, known as “Mind Body Health,” is also hoping to move into about 2,400 square feet of space on the building’s second floor. The business is currently based in Courthouse, in a building at 2200 Wilson Blvd, and is looking for a new permit to operate in the space.

Brookfield is also planning on adding two retailers to the ground floor, to further “activate the streetscape,” staff wrote. One, the soup-and-salad restaurant Zoup!, has already posted signs at the location. The other looks to be Poke It Up, according to a report from Eater D.C., a chain with a location in the Pentagon City mall.

County staff are recommending that the Board sign off on the proposal, hailing its potential to bring more business to “a building that has sat largely vacant for five years.”

The Board has certainly put an emphasis on reversing the county’s rising office vacancy rate in recent years — though Amazon’s arrival in Crystal City and Pentagon City will make a huge impact on that effort, officials have warned that neighborhoods like Ballston and Rosslyn still have some catching up to do.