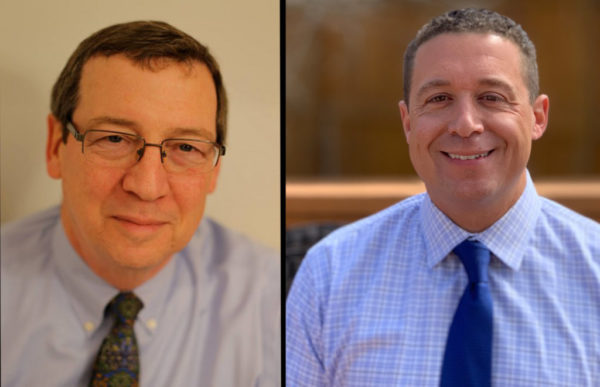 David Priddy told ARLnow that he’s filed papers to compete in the upcoming caucus to win the Democratic Committee’s endorsement in the race. School Board seats are nominally non-partisan, and candidates don’t run under party labels, but local parties frequently endorse candidates for the Board.

Goldstein announced his re-election bid in early January in the race for the lone Board seat on the ballot this fall. He’s seeking his second term in office after winning the seat in 2015, replacing retiring Board member Abby Raphael.

Democratic Committee Chair Jill Caiazzo says that Goldstein and Priddy were the only candidates to file for the caucus ahead of last night’s deadline. Considering that every School Board member for the last 15 years has won the party’s endorsement before going on to win the general election, the caucus will likely decide the outcome of the race.

Priddy wrote in an email that he’s an Arlington native, and grew up attending Arlington Public Schools. He serves on Superintendent Patrick Murphy’s Advisory Committee on the Elimination of the Achievement Gap and he has two children currently in the county’s school system: one at Thomas Jefferson Middle School and the other will attend Alice West Fleet Elementary School when it opens next year.

He hopes that, as “a product of APS as well as an APS parent,” he’ll have a unique perspective to bring to the job.

“Priddy is running for the School Board because he believes better transparency into School Board decision-making is needed, along with comprehensive planning for growth to enable fiscally-responsible financial investments in both new and renovated educational facilities,” his campaign biography reads. “He is not afraid to directly confront the tough issues – from technology to inclusion to capacity challenges – that Arlington’s schools are currently facing.”

Priddy’s Arlington Heights neighborhood has a bit of a fraught history with the school system, and Goldstein, in particular.

The process of determining how, exactly, the school system will add new space for high schoolers at the Arlington Career Center has frustrated many parents in the neighborhood, who argue that the school shouldn’t open as a high school serving the South Arlington neighborhood unless APS can guarantee it will boast the same amenities as the county’s other comprehensive high schools.

Similarly, the recent redistricting process to divvy up students from nearby elementary schools and send them to Fleet as it opens next year sparked conflict in the community.

Parents at Patrick Henry Elementary School, which will soon become the exclusive home of Drew Model School’s Montessori program, argued that Board members (Goldstein, in particular) repeatedly promised them that the school community would move as one to Fleet. School officials dispute their account, and the Board ended up directing about a fifth of Henry’s student body elsewhere, prompting plenty of hurt feelings.

However, Priddy does not make any direct reference to those controversies in his campaign materials, and he said he will launch his campaign in earnest in mid-March.

Goldstein and Priddy will square off in a three-day, “unassembled” caucus in June.

Caiazzo stresses that this process is different from a primary, which Virginia law does not allow to decide nominations in School Board races.