The Building Level Planning Committee (BLPC) and the Public Facilities Review Committee (PFRC) will meet ten times before March 2020, when the Arlington School Board is set to act on a concept design.

After years of deliberation from the School Board and the County Board, the completed Career Center will include:

The athletic field and parking is projected to be complete by the 2023-24 school year, while the performing arts center should be finished by 2025-26 school year. Despite the large increase in its student body, which will help to alleviate a capacity crunch at Arlington’s high schools, the Arlington Career Center will be an option school and not a comprehensive high school.

Total cost for the Career Center expansion is budgeted at $185 million, plus an additional $13 million for the Arlington Tech expansion. 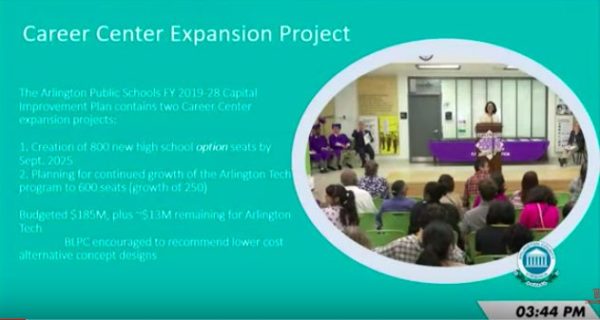 The BLPC will serve as the primary line of communication between community stakeholders and the School Board. During a project update during Tuesday’s County Board meeting, Board member Katie Cristol said that the School Board has asked BLPC to look for low-cost construction alternatives during the design process.

Meanwhile, the mission of the PFRC is to ensure the project properly utilizes the limited available land at the Career Center site near Columbia Pike, working as a direct line of advice and input with the County Board and County Manager.

The two committees held an introductory meeting on September 17, with the next scheduled for Wednesday, Oct. 2.

“This has a very significant budgetary implication in the Arlington Public Schools Capital Improvement Plan, and it’s because of the number of amenities that are coming along with these seats,” said Cristol.

Construction will not impede on the adjacent, recently-opened Montessori Public School of Arlington — formerly home to Patrick Henry Elementary — according to an APS spokesman Frank Bellavia. A member from the Montessori school will serve on the BPLC.

The Career Center recently moved eight new trailers onto its grounds to accommodate more than 150 new students who joined for the 2019-20 school year. Contrary to initial reports, the trailers do not intrude on the space used for the Career Center’s Animal Science Program, Bellavia said.

An open community meeting is scheduled to review the new, proposed Career Center designs. The meeting is set to take place on January 22, 2020, in the Arlington Career Center Commons (816 S. Walter Reed Drive) beginning at 7 p.m.

Read more →
More Stories
What’s Next: Long Bridge is the Linchpin of High Speed and Regional RailListing of the Day: 5612 5th Street N.