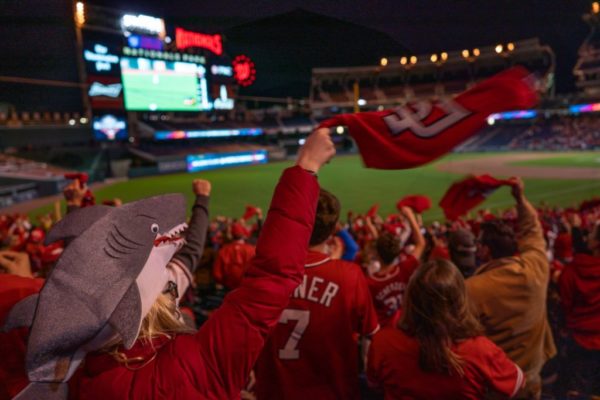 Congrats to the Nats — Fireworks could be heard in parts of Arlington as the Nationals won the World Series in Game 7 just before midnight. [Twitter, Twitter]

Nats World Series Run Helps Local Startup — “BreakingT’s business is very much staying in the fight. The Arlington T-shirt retailer had already seen a significant boost from the Nationals’ playoff run… Until last week, BreakingT’s biggest revenue day was during the All-Star Game hosted at Nationals Park last July. But each of the three home World Series matchups have now exceeded that.” [Washington Business Journal]

Severe Storms Expected Tonight — “Hazardous Halloween weather is possible in the Washington area and many parts of the Mid-Atlantic, where a line of storms, some of which may be severe, will sweep through during the evening. ‘A potentially dangerous weather event is unfolding for Thursday,’ wrote the National Weather Service serving the Washington region.” [Washington Post, Twitter]

Chick-fil-A Customers Cause Crystal City Cycling Consternation — “Diving deeper geographically from streets to blocks and overlaying vehicle type, a story starts to emerge from the data. We already knew the majority of bike lane blockages were on Crystal Drive, but now we can see that the 2100 block of Crystal Drive is where all the action is, why? Chick-fil-a!” [Greater Greater Washington]

Paul Rudd’s Pentagon Ice Cream Connection — “While searching for the quickest route to the Fashion Centre at Pentagon City from my apartment, I went down a weird internet black hole and discovered that the Google Maps photo for the Baskin-Robbins at the Pentagon features Paul Rudd dressed as a Baskin-Robbins employee. What’s the deal with that?” [Washingtonian]