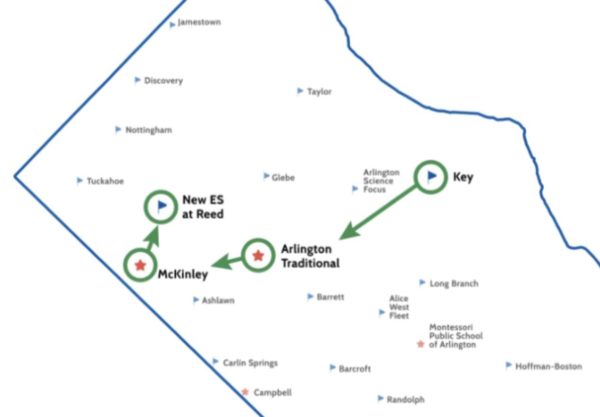 Students and staff at three North Arlington elementary schools will be moving to new buildings, starting in the fall of 2021.

The School Board voted 4-1 Thursday night to approve the controversial school swap, despite vocal opposition from parents, including a petition against it that received more than 2,000 signatures. As with last night’s school calendar vote, Reid Goldstein was again the lone vote against the proposal.

Under the superintendent’s recommended school moves, the following will happen:

Those against the moves expressed concerns about longer drives to school, breaking up school communities and making it more difficult for those from disadvantaged backgrounds to stay at their current schools.

There were also speakers in favor of the moves, including a father whose young kids will soon be entering Arlington Public Schools. He argued that the moves make sense, despite some short-term pain for current parents, and are better than the alternatives presented by APS.

Administrators said about twice as many students would be assigned to new schools under boundary changes alone, compared to the adopted school swaps. That’s in part the result of population growth along the Orange Line corridor, near Key Elementary.

“Approximately 4,000+ or 38% of all neighborhood elementary students would be reassigned to a new school” without the school moves, APS said.

Some School Board members were apologetic in voting yes on the proposal.

“I am making the difficult decision that I believe is right for the whole county,” School Board Chair Tannia Talento said. “This is the best decision we can make at this time… ensuring that there is minimal impact on all schools.”

“I know this is hard and I’m sorry it’s not turning out as many of you would like,” Talento said.

There’s more hard work ahead for the School Board. Next up, the Board will tweak elementary school boundaries to balance enrollment at other schools, and will create new neighborhood attendance zones for some of the schools involved in the swap. 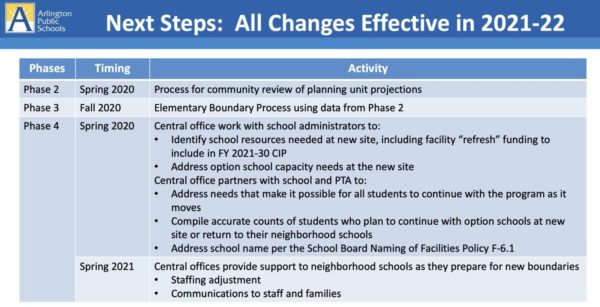 The full Arlington Public Schools press release about the decision is below, after the jump.

At its Feb. 6 meeting, the Arlington School Board adopted the Superintendent’s recommendation to move three schools as part of the Elementary School Planning Process for the 2021-22 school year at the Feb. 6 meeting. The adopted plan includes moving the majority of McKinley students to the new school at the Reed site; the Arlington Traditional School (ATS) program to the current McKinley building, and the Key Immersion program to the current ATS building. This recommendation will repurpose the current Key building into a new neighborhood school in a rapidly growing part of the county where APS needs more capacity for students.

These moves are in preparation for the Fall 2020 Elementary School Boundary Process, which will create an attendance zone for a new school at Reed and an adjusted neighborhood school attendance zone around Arlington Science Focus School (ASFS), and will adjust boundaries for most, if not all, APS elementary schools to relieve overcapacity at some schools. All school moves and boundary changes will go into effect for the 2021-22 school year.

“This was a complex but prudent step in planning for our future, preparing us for the upcoming countywide boundary process this fall and addressing the imbalance between where APS has seats and where students live across Arlington County,” said School Board Chair Tannia Talento. “We recognize how difficult these changes are for our community and we will work closely with the communities affected to support these transitions.  We thank the community for sharing their input with APS. The passion for schools and neighborhoods was evident over the past three months and speaks to the quality of our schools.”

“These school moves will open up neighborhood seats where these are needed and will lay the foundation for staff to create boundaries that alleviate crowding at schools across the county, keep together as many students as possible, and help us manage transportation services and costs,” said Lisa Stengle, Executive Director, Planning and Evaluation. “Over the next several months, APS will begin working with the schools involved in this move initiative to provide information to families ahead of the 2021-22 school year.”

The second phase of the process later this spring includes working with community members to review the planning unit data that will be the basis for the fall boundary processes for elementary and high school. In Phase 3 (Fall 2020), APS will adjust school boundaries to take effect in the 2021-22 school year.

Shreeya Aranake contributed to this report