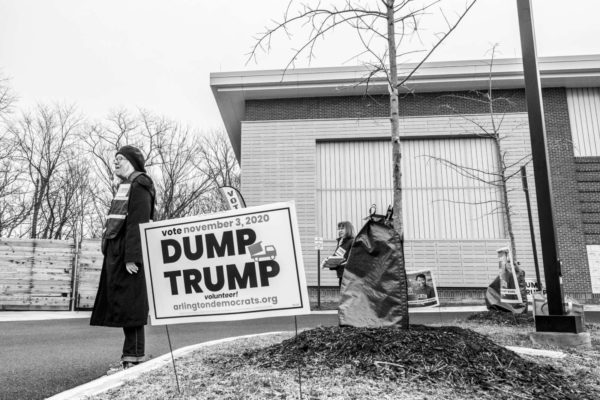 Biden Wins Virginia — “Virginia voters have overwhelmingly given former Vice President Joe Biden a sizable win over Vermont Sen. Bernie Sanders in Tuesday’s primary election. According to unofficial state election returns, Biden has been called the winner of the state with 53.3 percent of what was a record primary turnout, and will capture the largest share of its 99 delegates.” [Patch, Washington Post]

Bernie Underperforms 2016 — In the two-way race between Hillary Clinton and Bernie Sanders in 2016, Sanders captured 33% of the vote in Arlington. Yesterday, he received 19% of the vote, a close third to Elizabeth Warren at 20%.

FAA Taking Comments on DCA Noise — “After changing the routes for planes taking off from Reagan National Airport, in Arlington, Virginia, the Federal Aviation Administration is holding a public comment period. The comment period closes March 30. In an email, Libby Garvey, chair of the Arlington County Board, said that even if people in the community submitted earlier complaints, the FAA will not be officially considering them.” [WTOP]

Tafti Defends Changes at Prosecutor’s Office — “There’s this false critique that these reforms are making our communities less safe. We’ve been fed a story for decades that we have to incarcerate and have zero tolerance in order to be safe. More and more we are finding that harm reduction — for drug use, mental illness treatment, restorative justice — is more effective.” [Arlington Magazine]

Police: Two Arrested in Stolen Vehicle — “At approximately 2:40 p.m. on March 1, officers [in Pentagon City] were alerted to a license plate reader hit on a vehicle previously reported stolen out of Washington D.C. Officers observed two subjects walking away from the parked vehicle and conducted surveillance in the area. The subjects were taken into custody without incident as they returned to the vehicle… A search of the vehicle located suspected narcotics.” [Arlington County]

Chamber Cheers Tourism Tax Bill — “The Arlington Chamber of Commerce celebrates the General Assembly’s establishment of permanent funding for tourism promotion in Arlington. This 0.25 percent Transient Occupancy Tax surcharge on hotel rooms is used exclusively by Arlington Convention and Visitors Service… to grow travel and tourism in Arlington. Previously, the tax surcharge was enacted with a July 1, 2021 sunset” provision. [Arlington Chamber of Commerce]

Bill Could Boost N. Va. Metro Funding — “Northern Virginia localities could soon have the ability to spend more money on Metro service increases after state lawmakers approved a bill that tinkers with the dedicated funding agreement for the transit agency… Virginia’s total financial contribution to Metro can’t increase by more than 3% each year, a condition designed to impose fiscal discipline on the agency. The bill from Del. Vivian Watts, D-Annandale would exempt any costs associated with service increases from that cap.” [Washington Business Journal]