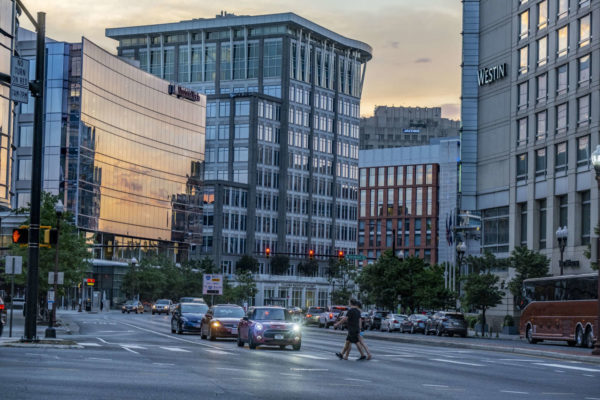 ‘BLM’ on Fairlington Bridge Restored — Residents of the Fairlington area used ties to restore a Black Lives Matters message on the bridge over I-395 over the weekend. The letters “BLM” had previously been placed on the bridge’s fence but later removed by an unknown party. Also this weekend, below the BLM letters someone scrawled “Trump 2020,” but that was later covered and “Black Lives Matter” written over it in chalk. [Twitter]

Update to Jim Pebley Obit — Per an email from former county treasurer Frank O’Leary: “You will be pleased to hear that, due to the actions of former commanders of our County’s namesake ship, it appears that Commander Pebley’s ashes will be spread at sea by the USS ARLINGTON. This is a singular honor and reflects the high respect the Navy feels for Jim. Nothing less than he deserves. There is an old adage, ‘The Navy takes care of its own.’ Perhaps, the same can be said of Arlington.”

Candidates on the Arts — “Arlington County voters will go to the polls on July 7 to determine who will fill the County Board seat of the late Erik Gutshall. In order to help voters understand each candidate’s stand on the importance of arts and culture in the County, Embracing Arlington Arts sent out a questionnaire for the three candidates to complete covering several issues pertaining to the arts in Arlington.” [Press Release, Embracing Arlington Arts]

Nearby: Fairfax Teachers Revolt — “A day after one of the nation’s largest school systems announced its proposal for fall learning, teachers within Fairfax County Public Schools rose in revolt and refused to teach in-person, as the plan demands, until officials revise their strategy.” [Washington Post]