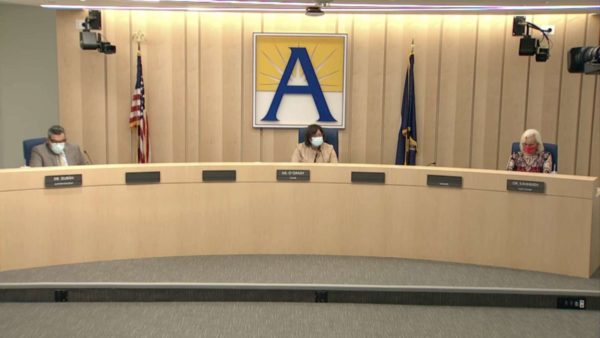 (Updated at 11:55 a.m.) After years of school enrollment growth, Arlington Public Schools had fewer students enrolled this week than as of Sept. 30, 2019.

Superintendent Dr. Francisco Durán revealed the numbers at last night’s School Board meeting. The first-day enrollment on Tuesday was 27,109 students, 911 fewer than last year’s official September 30 count of 28,020, he said.

As of April, enrollment this school year was projected to be 29,142, a 4% increase over last year.

The final, official count will take place in just over two weeks, on September 30. Durán told the School Board that some families are continuing to register and the numbers will fluctuate between now and then.

The drop in preliminary enrollment numbers comes as APS conducts classes exclusively online to start the school year, to the relief of some parents and the consternation of others.

During the public comment period of the School Board meeting, numerous parents called for in-person education to resume sooner rather than later, arguing that students are better off being back in school, even factoring the health risk from COVID-19. (At last check, APS was hoping to start a phased return to in-class instruction later this fall.)

One parent said he, as have others, declined to enroll his child in kindergarten this year, instead opting for a private, in-person program. That’s an option that is not available to working families with fewer financial resources, he said.

“Families like mine have significant means, and history tells us we will use those means to ensure and facilitate our children’s success,” the parent told the School Board. “Who do you think will find alternatives to your failure to uphold the social contract with schools?”

Others have similarly told ARLnow that they pulled their children from APS this year and enrolled them in private schools instead — or, for younger children, kept them in daycare — to ensure an in-person learning experience and to allow both parents to continue working.

During the School Board meeting, Durán also discussed this week’s technical difficulties and the school system’s meal distribution program.

Durán said most of the technical problems that prevented students from logging in to APS systems on the first day of school were solved that day. Other students continued to encounter problems on Wednesday, but Durán said those problems were fixed that night.

“Late Wednesday night we identified a software issue that was causing some further challenges for high school students using MacBook Airs. This was addressed and fixed as of Thursday morning,” his presentation said. “We are monitoring connectivity throughout this week to ensure all students can access learning and enhance the student experience.”

Durán also encouraged students who had switched from APS-issued devices to personal devices to switch back “so teachers can effectively leverage the resources and applications available on those devices.”

As for meals, Durán said that 4,356 students were served free meals on Tuesday and Wednesday. APS is serving free meals to all students 18 years of age and younger, at 10 drop-off locations and 21 school sites around the county.