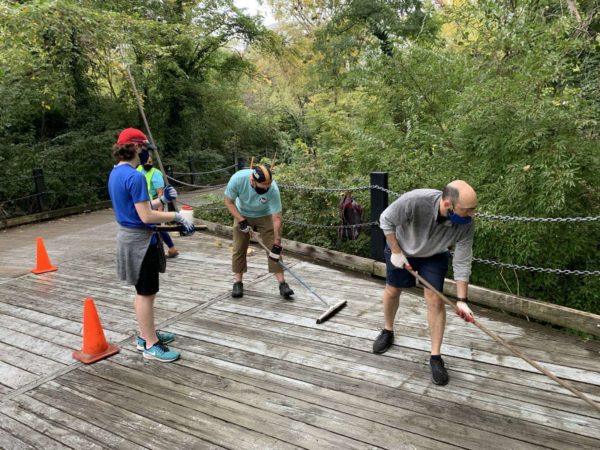 The group Friends of the Mount Vernon Trail are asking for help over the next three weeks to fix a trail bridge next to Theodore Roosevelt Island.

The efforts come after successful fundraiser that raised more money than the friends needed to apply non-skid treatment to the bridge, which is nicknamed the “Trollheim Bridge” and has a reputation for being dangerous to bike riders.

After scrubbing away mold, moss and mildew, the Friends are turning to fixing loose boards and replacing damaged boards, another hazard on a bridge that the organization says is “notoriously slippy.”

The opportunities are part of the ongoing effort to “make Trollheim Bridge a little less trollish,” said the announcement on the website.

Just a reminder: wooden bridges are like ice in the rain. #trollheim #bikeDC pic.twitter.com/SEmao9azKy

This Saturday, the friends will be reattaching boards bicyclists often hear “flopping around” on the bridge. Next Thursday, they will be replacing rotting deck boards. On Saturday, Dec. 5, there will be a second event for fixing boards on the bridge.

“There’s a lot of freaking loose boards,” the announcement said. “If we run out of boards, we’ll start flipping some of the boards to extend their life.”

The Friends encourage those who are interested to register via the above links. According to the registration page, volunteers are asked to bring water, gloves, a safety vest and a cordless drill, if they have one.

Extra money from the GoFundMe fundraiser went toward a pressure washer that is speeding up cleaning, as well as extra non-skid treatment for two other bridges with many crashes, including Bridge 1 north of Mount Vernon estates.

In May, the National Park Service released a study of the trail that recommends widening it in some places, particularly hot spots for crashes. There were 225 reported bike and pedestrian crashes on the trail between 2006 and 2010, according to the study, though most were reported in parts of the trail south of the bridge.

The Friends of the Mount Vernon Trail, founded in 2018, supports the National Park Service and helps keep the trail safe through education, trail maintenance and community events.