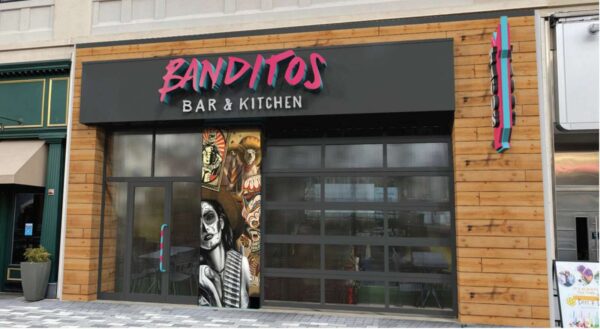 (Updated at 10:30 a.m.) A Baltimore-based Mexican restaurant is the next buzzy eatery to open in Pentagon City.

Late last month, Banditos Bar & Kitchen announced via social media that they will be opening an outpost at Westpost, the shopping center formerly known as Pentagon Row.

This will be their third location, but the first in Virginia.

Owner Sean White tells ARLnow that they will be taking over the space that is currently Thaiphoon restaurant, likely in October. From there, the build-out should take about six months. He expects Banditos to open in March or April 2022. It was not immediately clear whether Thaiphoon will be closing in Pentagon City or moving to a new location.

White says they’ve wanted to open a restaurant in the D.C. area for sometime. Arlington is a particularly good fit for the brand, he says, due to Amazon’s continued expansion into the county.

Banditos is owned by White Oak Hospitality Group, a Maryland restaurant group with a number of ventures in Baltimore and surrounding areas. This will be their third restaurant at a property owned by Federal Realty Investment Trust, the owner of Westpost and the Village at Shirlington.

The Arlington location of Banditos will be roughly the same size as the other locations, about 3,000 square feet, according to the Washington Business Journal. There will also be outdoor seating.

On its website, the restaurant describes itself as “a TACO temple inspired by the mouthwatering flavors of Mexican street food.” The menu includes classic fare like tacos, burritos, quesadillas, and margaritas.

In recent months, a slew of restaurants have also announced impending arrivals at Westport.

James Beard-nominated local chef Cathal Armstrong is opening an Irish restaurant this spring in the former Siné space, next to the future Banditos. Northern Virginia-native Chef Tim Ma’s popular Lucky Danger is readying for a likely April opening. Johnny Spero and Scott Parker’s Nighthawk Pizza is planning to start serving in the fall.

Several notable businesses have already opened including Wild Tiger BBQ pop-up, Origin Coffee Lab and Kitchen, and Napoli Salumeria. Both Westpost and the Village at Shirlington now allow restaurant patrons to take alcoholic drinks to go, for consumption in other parts of the dining and shopping district.