Construction has started on two residential towers at 1900 Crystal Drive in Crystal City, according to developer JBG Smith.

The announcement came nearly one year to the day after the County Board approved the project, which involved tearing down an aging office building.

The new development at 1900 Crystal Drive will have 808 multifamily rental units and about 40,000 square feet of street-level retail across the two towers, each to be LEED Silver certified and approximately 300 feet tall, according to the developer.

Through a spokesperson, JBG Smith declined to comment on when the towers are expected to be completed. Last year, however, when the County Board met and approved the project, a company rep said construction could take 2-3 years.

“The start of construction on 1900 Crystal Drive marks yet another major milestone in National Landing’s ongoing transformation,” said Anthony Greenberg, Executive Vice President of Development at JBG Smith. “The introduction of new residences, restaurants and shops at 1900 Crystal Drive, combined with our recently delivered retail and entertainment district just about a block away will more than double the concentration of street-facing retail amenities on Crystal Drive.”

Residents will have access to private rooftops and green spaces. At the street-level, JBG Smith is planning a pedestrian-friendly street that will connect 18th and 20th Streets S. as well as open park space. JBG Smith will provide a number of community benefits, including enhanced streetscapes, a grand staircase connecting to public open space and bicycle facilities. 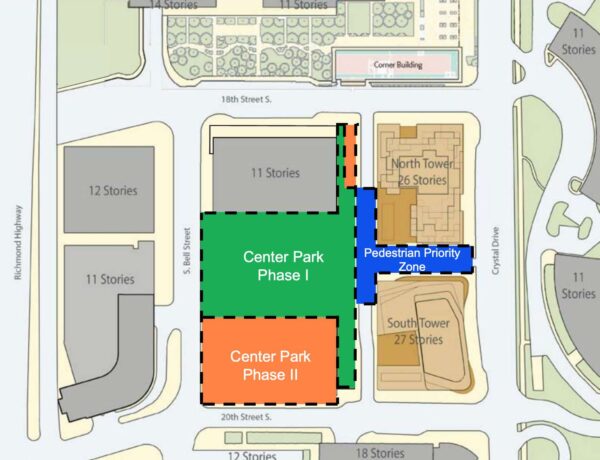 JBG Smith, the developer, leasing agent and property manager for the Amazon HQ2 project, anticipates that with Amazon’s arrival, National Landing’s daytime population will increase from 50,000 people to 90,000 in the near future.

The housing and amenities at 1900 Crystal Drive and neighboring developments will be a “thriving, mixed-use environment [that] will allow people to easily walk from their home or office to their favorite restaurants and amenities — cementing National Landing as a destination both day and night,” Greenberg said.

Neighbors and visitors can expect sidewalk closures during construction.

“This exciting project may create changes for our everyday pedestrian routines,” according to an announcement on the National Landing Business Improvement District website. The changes include: 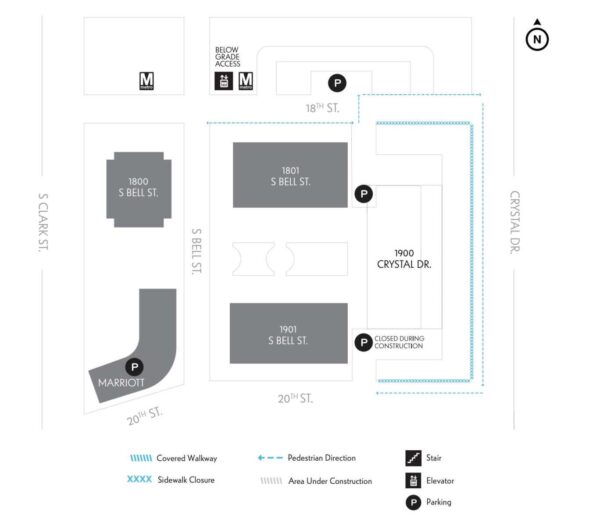 Photo (middle) via Arlington County and (below) via National Landing BID