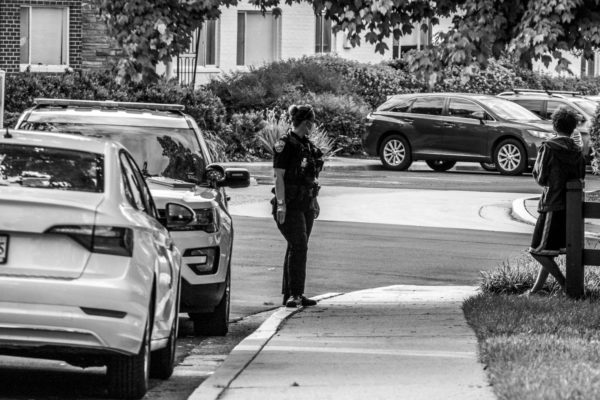 Arlington County Manager Mark Schwartz aims to have a new police chief in place within the next month or two.

And this police chief, he said during a meeting last week, must appreciate Arlington’s diversity and understand how different communities react to police presence.

“Our police officers meet with residents, visitors and those who work here during the most stressful moments of their lives,” he said. “I’m looking for a chief who understands our community gains strength from its diversity.”

The police department has been without a permanent leader since September, when the former police chief M. Jay Farr retired, citing souring relations with the County Board as one of his reasons for leaving. Acting chief Andy Penn is leading in his place.

Meantime, Schwartz has been conducting a nationwide search while a consultant, Leroy Thompson, gathered input from police officers and community members.

The consultant found that police officers want a chief who will boost morale, support officers, regain their trust and help improve race relations, Thompson said. They are wary of the county overreacting to a national narrative that “wasn’t severe in Arlington,” he said.

The community, meanwhile, wants a chief who will build relationships in the community and with other county departments to address peoples’ needs, Thompson said. They envision an approach to law enforcement that focuses on connecting people with needed services, instead of the current strategy centered on punishment, which they say is a holdover from the war on drugs, he said.

One area of agreement? Thompson said the community and police officers stressed the new hire should not seem like a political appointment.

Amid a national dialogue on race and policing, Arlington has taken several steps to respond to calls for police reform, including recently budgeting for full time police auditor/monitor position and a civilian mental health crisis response team.

Schwartz said a consultant is also reviewing ACPD’s policies guiding use of force, body-worn cameras, and the collection of data, as well as how successful the department is at recruiting and retaining officers. The report was set to come last fall but has yet to arrive, he said.

This past winter, the county implemented a body-worn camera program, and in January, Penn signed onto the Northern Virginia Regional Critical Incident Response Team, which allows for an independent investigation into serious uses of police force.

In February, a “Police Practices Group” convened last summer presented myriad ways to change how the police respond to behavioral health crises and enforce traffic violations. Schwartz said he expects the new chief to carry out these recommendations.

“It’s my firm expectation — I have made it clear to anyone who has interviewed for the position — that they will follow all the recommendations I support from the PPG and he/she is free to challenge me on those I didn’t recommend,” Schwartz said. “I expect whoever the next police chief is will be walking around with a tired, tattered copy of this document in his or her front pocket.”

A press release from Farr’s retirement timed the hiring to come after the PPG wrapped up its work. One of its recommendations is the creation of a civilian review board.

The Civilian Review Board will have the authority to receive complaints, review investigations, advise on policies and procedures, issue public reports, and engage with the community. It will be overseen by the paid auditor/monitor.

The Board will most likely approve a request to advertise, and will then set a date to hold a public hearing, perhaps at the June Board meeting, county spokeswoman Jennifer K. Smith said.

Schwartz anticipates launching the review board this fall.

One lingering question is whether the review board should have the ability to independently launch reviews of officers and discipline them. Schwartz did not confer that power on the board, saying “it’s difficult to have me support an outside group disciplining county employees.”

Separately, the county manager will also bring forward proposals related to other recommended policy changes, including repealing the ordinance that makes it illegal for people to refuse to identify themselves when an officer asks, which will require County Board action.