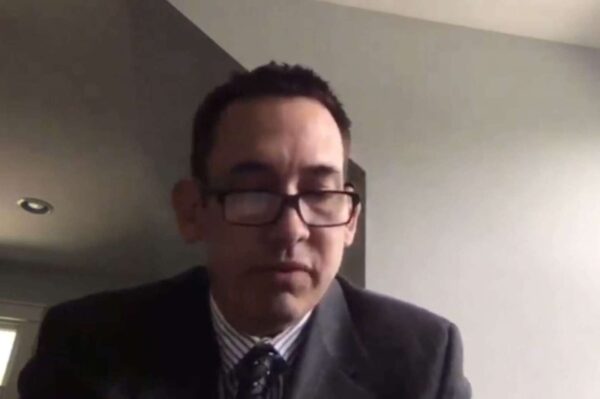 (Updated 12:20 a.m.) Before the coronavirus, Reade Bush’s son was a talkative child with autism and ADHD who loved school and his friends.

But the pandemic changed the world and in turn changed him. Without a routine and social opportunities, his son created an imaginary world “with 52 friends.” By summertime, he struggled to distinguish his real world from his imaginary one. He began hallucinating.

“On his ninth birthday, he asked me, ‘Daddy, can I die for my birthday?'” he recounted to some members of the U.S. House of Representatives’ Labor and Education Committee last Thursday. Encouraged by another APS parent, who had connections on Capitol Hill, Bush told members of the Early Childhood, Elementary and Secondary Education Subcommittee about the ways COVID-19 has impacted students with disabilities.

Public school systems are required by law to provide to students with disabilities the specialized instruction and therapeutic services they need to learn alongside their non-disabled peers where possible. Using his family’s story, Bush told the committee that virtual instruction has made it almost impossible to meet that charge.

Arlington Public Schools, which shut down in March 2020, started the 2020-21 school year with four days of distance learning and one planning day. By November, some students with disabilities could return for in-person learning supports. Since mid-March, students across all grade levels have trickled back for two days of in-person instruction.

This fall, 95% of students will be enrolled for five days a week of in-person instruction, something administrators have repeatedly told families and School Board members that they will deliver. But Bush said his son and and his daughter, who has cerebral palsy, have regressed academically and socially and should have been given in-person instruction sooner.

Over the last year, many parents have recounted stories of their children losing their love of learning. But for Bush, his son lost more than that — he lost sleep, social skills and his grip on reality.

“We feel like we have lost our son,” he tells ARLnow.

Bush and his wife recorded and sent to administrators videos of their son and their daughter struggle to engage with their teachers. He praised his kids’ teachers, therapists and school building-level administrators for “trying to make lemonade from lemons” but Bush had to work nights and his wife had to quit her job to support their children from home.

The parents aimed to get students with disabilities face-to-face with teachers and peers. Bush advocated for this during meetings with teachers and administrators, School Board office hours and Arlington Special Education Advisory Committee meetings.

Meanwhile, his son’s condition worsened, landing him in Children’s National Hospital for four days. After running numerous tests, doctors concluded the child’s autism had worsened due to social isolation.

Doctors prescribed four medications, but said “what he needed most was to return to full-time, in-person learning so that he could begin to solidify his identity with real, in-person teachers and peers,” Bush told the subcommittee.

Bush told ARLnow that three doctors wrote to administrators asking for his son to be placed in an in-person private special-education school. (When local public schools cannot meet children’s needs, it can use state funds to place them in a specialized school).

He said administrators denied his multiple requests in part because his son would only be socializing with students with disabilities. Where possible, another federal statute requires schools to place disabled students with non-disabled peers.

His son instead learned from an iPad in a classroom alone, save for a staff member who helped him, he said.

“In November, we brought in our most vulnerable students with disabilities population to immediately help provide support to access virtual instruction and as soon as we could staff it and tried to provide in-person instruction to the extent possible,” APS spokesman Frank Bellavia told ARLnow this morning. “While some support was provided by special education assistants and Extended day staff, we worked hard to provide training to the staff that supported [these students].”

But things have improved with school partially in-person. Twice a week, his son can socialize with classmates, and on the other two days, he learns with other students getting additional support.

“Saturday night was the first time he sat at dinner and had a conversation with us [since he developed his imaginary world],” Bush said.

The child still has hallucinations in which he thinks people are hurting him.

Today, Bush said his son can manage math — with help — but he is a full year behind in reading.

APS began providing recovery services this quarter, with more opportunities this summer, and those services will continue next year for all students who need them, Bellavia said.

Bush said his son was given an extra 30 minutes a week of reading recovery, but was denied requests for more hours.

“APS’s plan is summer school, but they’re not going to be able to catch up a year’s worth of material in four weeks,” Bush said.

Since then, the school system announced that eligibility for summer school will have to be restricted from all eligible elementary students to preschool students, certain students with disabilities and English-language learners, citing teacher shortages.