It’s official: The Virginia Department of Transportation recommends turning Route 1, which is elevated over 12th, 15th and 18th streets, into an at-grade urban boulevard.

“An at-grade configuration for Route 1 provides most desirable characteristics that meet the multimodal and community vision for National Landing,” according to presentation materials from a virtual VDOT meeting Wednesday.

The news caps off one year of study, but is not much of a surprise, as the at-grade solution seemed to emerge as the likely recommendation over the last few months despite some concerns about it being more dangerous for pedestrians. But the newest version appears to take into account concerns among some over the number of lanes, pedestrian safety, and the possibility of traffic overflow onto local streets.

The surface-level Route 1 that VDOT envisions would have wide buffered sidewalks on both sides, six to seven narrowed travel lanes, a 30-mph speed limit, wide crosswalks for pedestrians and bicycles, landscaping and medians with pedestrian refuges.

That is a few lanes fewer than the nine-lane option for the intersection with 15th Street S. that VDOT floated earlier this year. Last night’s presentation said eight- and nine-lane options are “not conducive for pedestrians or the vision for Crystal City.”

According to the presentation, however, even these improvements will not significant reduce crashes and increase pedestrian safety, increase transit effectiveness, or reduce vehicle traffic along an at-grade Route 1.

VDOT indicated two things will be needed to make an at-grade Route 1 safer. First is a travel demand management (TDM) strategy to bring down traffic levels. Second, and in response to public comments, the department said it will consider a separated pedestrian crossing over or under Route 1 at 18th Street S.

A “comprehensive and effective TDM strategy that reduces traffic volumes 20% to 30% below existing volumes” will “reduce future congestion and future diversion of traffic to local and regional roads,” according to the presentation materials.

The pedestrian crossing study would look at cost, aesthetics, use, construction feasibility, maintenance and accessibility, the presentation said. Possibilities for grade-separated crossings include a pedestrian underpass, a tunnel connection to the Crystal City underground, or a pedestrian bridge over Route 1. 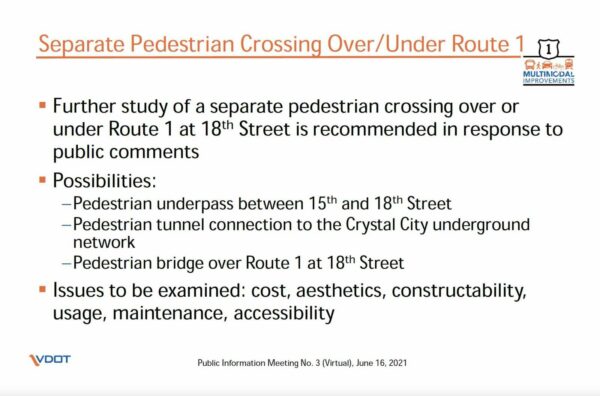 Both the TDM and pedestrian crossing proposals will be explored in a second phase of the study. The next phase will likely further examine the department’s third recommendation — based on a concept requested by Arlington County staff — to allow all turns at 15th Street S. but no left turns at 18th Street S., near the Crystal City Metro station.

Realizing the urban boulevard vision could cost $180 million, which is less than the $260 million VDOT projects would be needed to create a split-level highway for through-traffic and local traffic, as envisioned in the ten-year-old Crystal City Sector Plan. 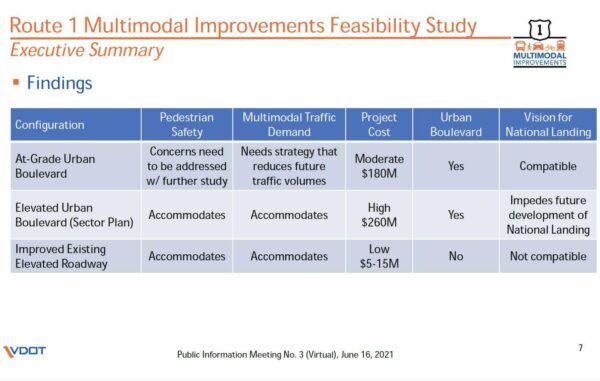 The National Landing Business Improvement District has been a champion of turning Route 1 into an urban boulevard. It recently released renderings of a road transformed by protected bike lanes, pedestrian refuges and prominent sidewalks, as part of a new campaign, “People Before Cars,” which has featured outdoor signs and public advocacy.

The state transportation department is accepting public comments on these recommendations through July 12. A draft report will come out in August and a final report in September.