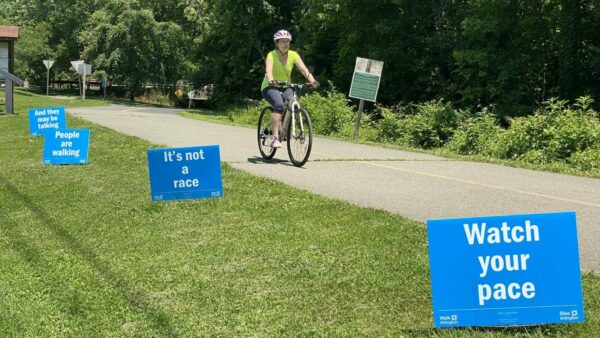 Big Changes Proposed for Shirlington — “A proposal to re-imagine the streets of Shirlington is being put forward. Last July, the Arlington County Board approved mixed-use rezoning for nearly ten acres of the Village at Shirlington. Now, Federal Realty Investment Trust (FRIT) is putting forth a vision to transform the streetscape throughout the area… Campbell Avenue will be the focal point for these improvements, updated with patterned pavers and interactive sculptures.” [UrbanTurf]

Yorktown Soccer in State Final — “Somewhere in the mess of bodies, Patriots senior Gibson Lusk poked the ball into the net. It gave Yorktown a lead for good and punctuated the full turnaround of a game that started slow and sloppy for the Patriots. Now, they are headed to the Virginia Class 6 title game after a 3-1 victory Monday.” [Washington Post]

Huske Reacts to Olympic Qualification — “In her first on-camera interview since returning from Omaha, Torri talked with 7News sports anchor Scott Abraham about her incredible journey to the Olympic Games. ‘At first it was very overwhelming, I feel like it’s just so unbelievable that this would happen to me of all people,’ Huske told Abraham… ‘I never thought I would be in this position and it’s really weird to think that some little kid looks up to you.'” [WJLA]

Amazon Donated Antiracism Books to APS — “The emails show Amazon employees reached out to Arlington Public Schools as part of ‘NeighborGood,’ a program to donate $100,000 to schools and other institutions that ’empower black voices and serve black communities.’ Despite Amazon’s offer to purchase Kindles or other equipment, Arlington Public Schools director of diversity and inclusion Arron Gregory requested copies of [Ibram X.] Kendi’s Stamped: Racism, Antiracism, and You. Amazon donated between 500-600 copies of the book to Wakefield High School and paid $10,000 to have Kendi’s coauthor Jason Reynolds address students.” [Washington Free Beacon]

Crystal City Metro Mural Finalists Selected — “Six visual artists have been chosen as finalists to paint a new mural at the Crystal City Metro Plaza, according to a release from the National Landing Business Improvement District (BID). The BID put a call out in May for individual artists or teams of artists to submit their credentials by June 1 so judges could determine if they had the experience and the chops to tackle the project.” [Patch, National Landing BID]

Memories of a Local Cicada Expert — “Ann thought of Allard recently because of one of his favorite subjects: the periodical cicada. She hadn’t realized he was an expert in Brood X. Then she found his 1937 paper in the American Naturalist journal. Ann posted her memories on Facebook’s ‘I grew up in Arlington, VA’ page and was surprised at how many other people from the neighborhood remembered the old scientist.” [Washington Post]