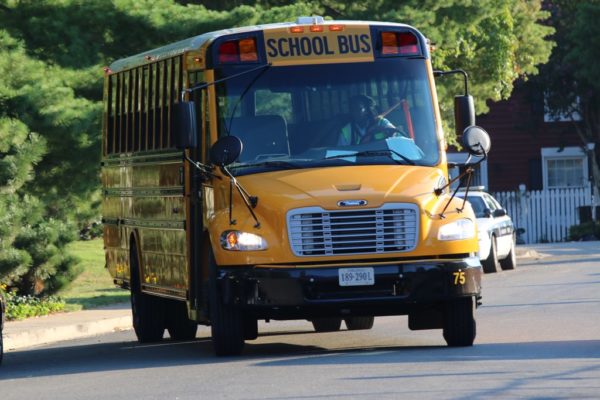 With one month to go before school starts, parents are being urged to enroll their kids in some Arlington public schools amid a continued drop in enrollment.

Screenshots and emails provided to ARLnow indicate some elementary schools, including Discovery and Jamestown, need just a few more kindergarteners before they can officially get one more kindergarten class. The correspondences say the extra class would reduce class sizes and keep teachers at the school they were teaching at last year.

“If you have a rising Kindergartener, please register your child ASAP!” one woman wrote on Nextdoor. “I heard through the grapevine that [Discovery is] 3 kids shy of a third class… which means they may have to let an amazing teacher and assistant go! Help spread the word to any new families in the neighborhood!”

An email to Jamestown families pleaded with families to “pretty, pretty please” register their children as soon as possible, as the elementary only needs 10 more students to add a fourth class.

School starts on Monday, Aug. 30 for most students. The vast majority will be in-person five days a week, though APS is offering a full-distance model this year for families still unsure about returning to school amid the pandemic, as cases rise and as the state recommends all students wear masks at the elementary level.

The encouragement to enroll comes on the heels of new enrollment numbers APS released earlier this month, showing a continued drop in APS students since the start of the pandemic. The new data indicates so far, there are 26,052 students registered for the fall. Of those, 891 will be full-time distance learning, and 25,161 students will be in-person full-time. In June of this year, there were 26,502 students enrolled, and in June 2020, 28,142 students were enrolled.

APS attributed the drop last year due to the pandemic, when many families decided to wait a year, homeschool their kids or switch to private and parochial schools. Since then, officials have said the schools should prepare for enrollment to bounce back.

Enrollment numbers will be made official in October. Lower summer numbers and encouragement to register are both annual phenomena, APS spokesman Frank Bellavia said.

“Every year at this time, we encourage families to register as there are always families new to the area, rising kindergarten students, military and embassy families,” he said. “We typically see a large bump in registrations in August and even September.”

Two years ago, Ashlawn Elementary School was slightly below projections and then saw 49 students register on the Friday before school started, he said.

As for the emphasis on class sizes, that’s because APS had to increase class sizes at all levels due to budgetary decisions made earlier this year.

“The total enrollment in the Virtual Learning Program has decreased by more than 300 students since June, when we announced that virtual families can transition to in-person school at any time,” spokeswoman Catherine Ashby said.

Bellavia said teachers at schools that lose classes due to lower enrollment won’t lose jobs, but will instead be transferred to where they’re needed.

“We are committed to retaining the excellent teachers that we have, and look for opportunities in their current school or to re-assign teachers to school where enrollment requires additional teachers,” he said.

Former APS parent Todd Truitt ran the enrollment numbers himself and developed the following graph. He said enrollment between June 2020 and July 2021 dropped 7.4%, which is comparable to the drop seen in New York City Public Schools.

Truitt, who pulled his kids from APS this summer, began looking into the data after learning that the 2,000 who withdrew last year were largely planning to stay away. At the time, the news prompted questions about how the drop would impact APS’s budget.

But since that discussion, he said it’s been crickets.

“It wasn’t discussed at the year-end review meeting, and it seems to be something the school board and the County Board don’t want to discuss,” he said.

For the group Arlington Parents for Education, which has been vocal in its calls for a full, five-day school week since last year, the push to get kids in school and decrease class sizes — when class sizes increased because of the budget — is at odds with the estimated $10 million APS could spend on virtual learning.

“[American Rescue Plan] funds are to be used for safe reopening of schools and to address student learning loss and support needs due to the pandemic,” the group said in a newsletter. “$10.95 million is 58.6% of APS’ entire ARP allotment. All of it is going to a new virtual school with 891 students.”

The estimated 111 full-time employees allotted to the virtual program represent all staff, not just teachers, and doesn’t take into account the 300-child drop in Virtual Learning Program attendees, Ashby said.