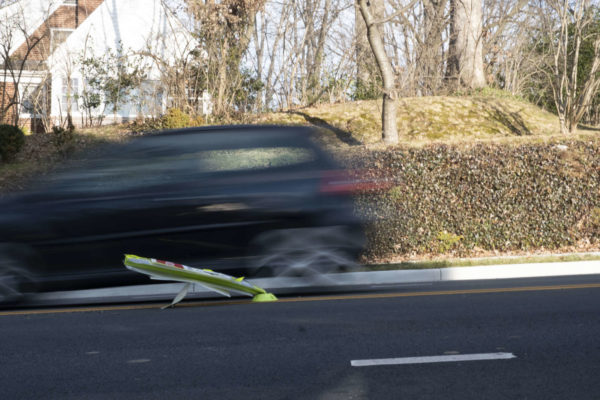 On a quiet residential street near Arlington Blvd, cars can be heard accelerating as they turn a corner, with their aftermarket exhaust giving off a loud “roar.”

“I’m eight stories up — not at street level, so to speak — so maybe you expect the noise to dissipate,” Betsy Thomassen tells ARLnow. “It’s Wednesday, and it’s happened five to six times… it’s just incredibly loud and a nuisance. In my condo, my furniture sometimes vibrates. That’s kind of incredible really.”

According to residents who have spoken to ARLnow, and who’ve posted on social media sites like Facebook and Nextdoor, there been a surge in modified cars speeding through neighborhoods. Some residents say the uptick is particularly bad along the Columbia Pike corridor and in the Clarendon area, and along the highways that crisscross the county.

“Anywhere there’s a corridor, you have high performance cars,” said Clarendon-Courthouse Civic Association President David Cheek, who even compiled a video, below, of modified cars roaring through his neighborhood. “It’s really rude to accelerate in an area with a lot of people, in a loud car, but there’s a ‘do whatever you want’ mentality.”

After nearly a year of receiving more complaints than usual, the County Board is preparing to take a number of steps to mitigate noise in Arlington and enforce noise maximums on cars and motorcycles, according to Board member Takis Karantonis.

One avenue members are pursuing is via the state legislature. The Board aims to have something on their legislative agenda for the next regular session in January, Karantonis said. They’re also looking to train police officers to engage drivers in conversations and get them to change their attitudes.

“I think that the County Board as a whole is interested in a way to enforce and discourage overwhelmingly noisy motoring in Arlington, especially in neighborhoods,” he said.

A lot of the especially noisy cars are running aftermarket exhaust systems made for racing, Cheek said. He theorizes that with extra time on their hands during the pandemic, more folks got interested in car modifications.

There is an entire, sophisticated industry around these mufflers, but there is very little regulation, Karantonis said, adding that he understands that modified cars sell like hotcakes in motoring and touring fairs.

“They often ‘sound’ as though they are also speeding, yet I’ve seen several that are loud, but didn’t appear to be speeding,” one said. “I suspect that those nature of the modifications.”

As a car and motorcycle enthusiast, Cheek said he understands the appeal of modifying a vehicle and wanting to enjoy it.

“I feel for them,” he said. “But they have to understand there are a lot of people who’re upset about it — on Columbia Pike and in  Clarendon — and that it’s not fair to everyone else.”

He added that noise pollution “isn’t just annoying — it impacts your mental health, and it actually affects your life.”

Karantonis said there are a few paths on the table, from enacting legislation to educating drivers.

Legislative action will be somewhat tricky, in part because a new state law went into effect in March that says police officers cannot initiate a traffic stop for, among other things, loud mufflers. The code still allows drivers to be ticketed for noise if they were pulled over for a violation such as speeding.

The law, sponsored by Del. Patrick Hope (D-Arlington), was passed to reduce racial disparities in traffic stops, as some police officers historically used pretextual reasons — such as a loud car or expired tags — to pull over residents and search their cars.

Locally, a police reform group found that reducing traffic stops would likely reduce the number of negative conflicts between the police and people of color in Arlington, and as a result, the county is installing more traffic cameras to enforce driving laws without creating possibly dangerous police encounters.

“We are asking our legislators for advice and guidance to make clear what is our goal, and what are some of the unwanted consequences of taking away the enforcement completely, as it is today,” Karantonis said. “You will see something on this with the Board’s legislative agenda at some point in November, beginning of December, but we have to find the best and the most effective way to get an amendment there, so that our law enforcement here will have something to work with that is effective, without the downsides of having traffic stops that are biased.”

Hope tells ARLnow that he is open to amending the law, in order to strike the proper balance between necessary law enforcement and eliminating “pretextual” traffic stops.

“We need to understand if this is related to speed, which needs to be enforced, or if it’s an emission issue, and see if we need to make an amendment to the law,” he said.

Hope said he has asked constituents to report where and when they’re hearing exhaust, to see if there is an uptick from after the legislation passed.

“Because I’ve asked for complaints to come to my office, I’ve heard a lot more about it, mainly around I-66 and Route 50, and people seem to think speeding involved,” he said.

For Cheek, speeding is a top concern. He said that the noise often comes with higher speeds and an aggressive driving style in residential areas that makes his neighbors feel unsafe to have their kids playing outside.

A possible amendment that would allow for some kind of enforcement is welcome news to Thomassen. She said that after taking the temperature of neighbors through conversations in-person and online, she sent notes to the County Board and reached out to Del. Hope, but hadn’t gotten many answers.

“Wherever we go, we get stonewalled,” she said.

Legislation alone will not solve the problem, according to Karantonis.

“Civic persuasion and soft measures will have to be in place as well,” he said.

He noted that in Canada, a trained specialist works with the police department so that if police come into contact with the driver of a modified car they can try try and persuade them to change their attitude. In Arlington’s sister city in Germany, Karantonis said he watched a specialized police patrol arbitrarily stop cars, ask drivers to follow officers to a noise-measuring unit, where the car’s noise levels are measured and a ticket could be issued.

“This is very complicated,” Karantonis admitted, suggesting that the auto modification industry will find a way to work around even this solution.

Here in Arlington, Hope said the complaints along I-66 and Route 50 may be higher because there is a shortage of state police to enforce speeding. But the current special session, which is putting more funding to state police, could “go a long way” toward hiring more deputies to patrol I-66 and other roadways to stop speeders.

In France, meanwhile, there are “noise cameras” that track and immediately ticket those with loud vehicles on city streets.

Nice, #Nantes, #Toulouse and 5 other cities in #France are launching "radars anti-bruit" (noise cameras) to automatically ticket drivers whose vehicles exceed a certain number of decibels on city streets.https://t.co/AccVKZM5Ks pic.twitter.com/OM4isTBy9p

Karantonis said the county is also considering measuring noise levels along arterial streets and roads in general, the way pollution, air quality and traffic are measured. For now there’s no proposal for any type of automated noise enforcement.

“In Arlington, we have certain neighborhoods under permanent noise stress, living close to I-66, I-395,” he said. “We are working with staff to find whether it makes sense to do that.”

END_OF_DOCUMENT_TOKEN_TO_BE_REPLACED

More Stories
Ed Talk: Parents and Civil DiscourseRemodeling vs. Moving: What Homeowners in Arlington Should Weigh