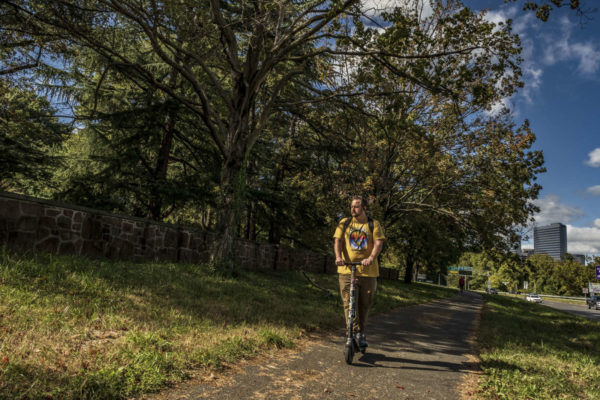 Arlington County is applying for $15 million in federal funding to improve cycling and walking connections around Arlington National Cemetery.

The money would partially fund the construction of a long-proposed Arlington National Cemetery (ANC) Wall Trail along Washington Blvd, which would connect Columbia Pike and the Pentagon City area with Memorial Avenue and the Arlington Memorial Bridge into D.C.

The Arlington County Board is scheduled to review the application on Saturday.

“The ANC Wall Trail will provide a missing link in the County and regional non-motorized network that will complete a bicycle and pedestrian connection between all three of the County’s major development corridors,” the county says in a report.

Right now, the cemetery is an “effective barrier to demand for non-motorized travel to and across Memorial Bridge,” according to the county, as security concerns after 9/11 led the Department of Defense to prohibit travel through the burial grounds.

The trail would run along the western side of Washington Blvd from Columbia Pike to Memorial Drive. Currently, there is a trail on the other side of Washington Blvd, a highway also known as State Route 27, but it gets dicey near Memorial Circle for pedestrians and cyclists looking to access the nearby Mt. Vernon Trail or cross into D.C.

The Columbia Pike interchange with Washington Blvd is set to be modified as part of the ANC Defense Access Roads Project, which will also move Columbia Pike closer to I-395, realign S. Joyce Street, build a new S. Nash Street connector road, and remove part of Southgate Road.

This work, funded by the federal government and managed by the Federal Highway Administration, will facilitate the addition of 70 acres to the southern portion of the cemetery, making room for 60,000 burial sites and space for the 9/11 Pentagon Memorial Visitor Education Center.

Road work is underway, and early next year, road users can expect to be redirected from the Pike to side streets near Pentagon City. The new burial ground could open in late 2025.

New cycling and pedestrian facilities and grading for the connection to the future ANC Wall Trail are also included in the project. Part of its scope includes designing the trail, for which Arlington County agreed to pay $500,000.

The county expects final designs to be developed over the next year or so. The overall cost of the trail is estimated at $25 million.

Once the wall trail is built, cyclists and pedestrians will be able to connect to Pentagon City via S. Joyce Street at the southern end of the ANC Wall Trail. It will allow safer bike and pedestrian travel between Pentagon City and Columbia Pike to D.C. and the Rosslyn-Ballston corridor.

North of Memorial Avenue, cyclists and pedestrians would be able to link up to the existing trail alongside Route 110, which provides a connection to the Iwo Jima Memorial, to Rosslyn, and to the larger network of bicycle and pedestrian trails along the R-B corridor, the county says.

The $15 million, if awarded, would come from the U.S. Department of Transportation’s “Rebuilding American Infrastructure with Sustainability and Equity” (RAISE) program, which has $1.5 billion earmarked to reimburse localities for surface transportation projects.

The Transportation Department caps awards at $25 million, and one state can receive no more than $225 million. Awards must be split evenly between urban and rural areas.

There is a “low likelihood of a funding award compared with other external transportation capital funding programs,” the county report notes.

Arlington applied last year and was denied funding — along with every other application from Virginia, according to the report. Staff will be meeting with federal transportation staff to understand why and plan to use that information for the new application.