(Updated at 4:30 p.m.) Some “missing middle” housing types would be legalized in residential zones throughout Arlington, under a draft proposal released late last week.

The framework is the latest output of the county’s Missing Middle Housing Study, which has been ongoing since October 2020. The study concluded that allowing housing that’s denser but no larger than single-family homes currently allowed under zoning would increase housing supply while diversifying housing types and providing a net environmental benefit.

The recommendations will now be subject to what is likely to be a contentious community engagement and feedback process, expected to be followed by County Board action to amend the local zoning ordinance this fall.

If ultimately approved, the new zoning rules would be similar to those that passed in Minneapolis and Portland to considerable fanfare and White House interest.

Specifically, the framework calls for dwellings with up to eight housing units in most of Arlington’s residential zones. The size of the structure would be subject to existing rules for single family homes, though existing requirements for on-site parking could be reduced.

The maximum number of units would scale down with the lot size, from a simple duplexes to townhomes and triplexes, up to an 8-plex on a relatively large lot. 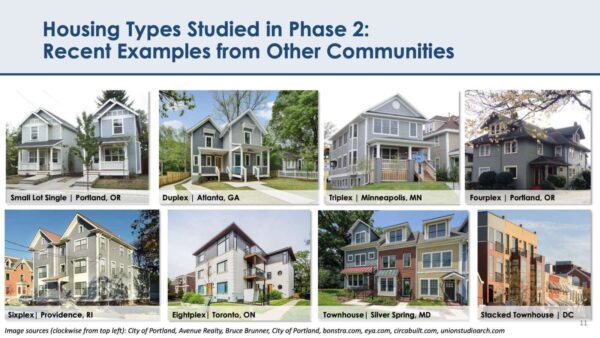 “Missing Middle Housing (MMH) types with up to 8 dwellings can fit within the same footprint, placement, and height standards as single-detached housing,” said the proposal. “Applying single-detached standards to MMH can minimize or eliminate environmental impacts, compared to status quo redevelopment.”

That represents a significant change from Arlington’s current zoning, which restricts most of the non-federal land in the county to only single-family homes. A county spokeswoman noted that while the proposed zoning changes would increase flexibility for property owners seeking to build, it would not force owners to change anything if they don’t want to.

“The draft framework would add housing type options in the County’s zoning districts that currently only allow single-detached housing and accessory dwelling units,” said Erika Moore, spokeswoman for Arlington’s Department of Community Planning, Housing and Development. “It does not eliminate any housing options that currently exist.” 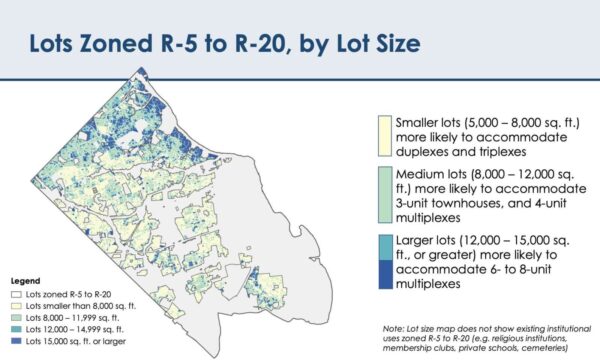 Also not changing: neighborhoods that currently allow duplexes and townhouses.

“Framework provides an opportunity to welcome potentially more neighbors within a similar building footprint,” said the presentation. “Neighborhoods that are predominantly duplexes and townhouses today (e.g., Arlington Mill, Green Valley, Penrose) and other mixed-use areas would not be impacted.”

Despite the big change, the study suggests that the actual impact on new housing would be modest.

“MMH has inherent economic disadvantages compared with large single-detached homes, including increased costs to build, increased complexity for ownership and sales, and lack of familiarity in the market,” said last week’s presentation. “Based on the financial feasibility and study of other jurisdictions, only approximately 20 lots per year would become ‘missing middle’ (94-108 units).”

That would work out to about 150 additional residents per year over the course of ten years. 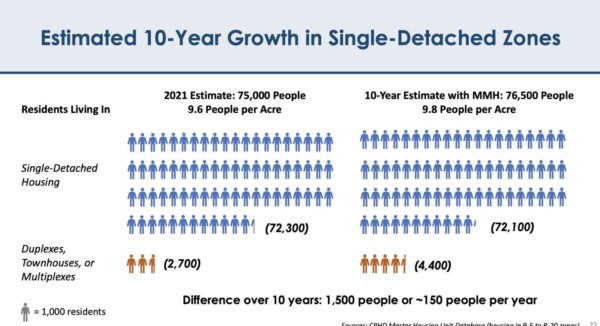 While not affordable to lower income households, the new housing is expected to be affordable to more residents than what would be built under current single-family-only zoning, which the presentation says incentivizes construction of large, expensive homes.

“Expected outcome is a wider range of housing types at lower prices than what is currently available,” the study said. “New housing types would be attainable for households with incomes from $108,000-$200,000+. Housing designs would be of a scale consistent with single-household redevelopment already occurring.” 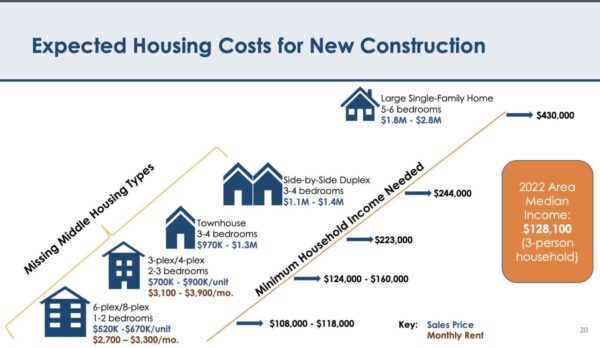 News of the framework was cheered online by those who have been advocating for denser housing in Arlington.

(if reading this right) – MM types would be allowed by-right. That's crucial. Allowing up to 8 is a bold, necessary step. Devil will be in the details to make sure other, smaller items don't get in the way of actual feasibility when the architects start drafting, but A+ here

“I am incredibly impressed with the Missing Middle Phase 2 Framework,” wrote Jane Green, a leader with the group YIMBYs of Northern Virginia, board member with the Alliance for Housing Solutions, and a former ARLnow opinion columnist.

“I think allowing up to 8 units on any R lot, from R5 all the way to R20, is a fair and equitable approach to allowing gentle density,” she wrote. “Keeping the existing standards for lot coverage, etc., is a sensible compromise. Most importantly, the framework includes a reduction of minimum parking requirement, which will preserve more trees and impervious surface and avoid an undue burden on new Missing Middle construction.” 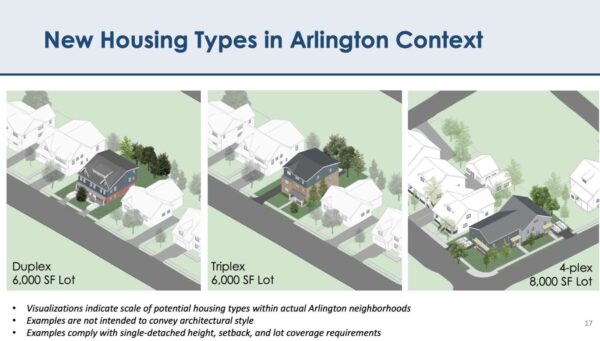 “This proposal far exceeds my expectations,” Green continued. “If the County Board adopts this through changes to the Zoning Ordinance, it would be one of the most significant rejections of exclusionary zoning in the country.”

Peter Rousselot, who leads the group Arlingtonians for Our Sustainable Future, said the framework’s recommendations would exacerbate problems already being caused by Arlington’s population growth.

“ASF’s own framework for analyzing both MM housing and other proposals to enable greater density stresses that the County forecasts population growth of approximately 65,000 people by 2045 under existing by-right zoning,” wrote Rousselot, who’s also a former ARLnow opinion columnist.

“Accordingly, ASF will be forced to advocate against the latest draft MM framework’s increased density unless these three specific studies are performed and shared with the community before the framework is finalized and adopted,” he concluded.

Asked about the estimate of 150 additional residents per year from missing middle housing development, Rousselot said that number “may be low” and “there is nothing in the proposed framework to prevent the County from subsequently adopting additional ‘incentives’ to increase production.”

A community engagement process — including a virtual Q&A session tomorrow (Tuesday) at 7 p.m. — is now underway following the release of the framework. That process, which will include a countywide mailer and “community pop-ups,” will run through May 27.