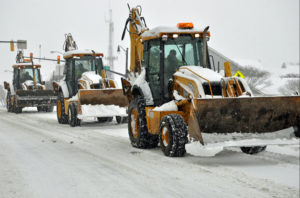 That’s nearly $4 million more than was spent the previous winter, when the county almost ran out of salt due to a succession of snow storms.

The total roadway snow removal expenditure — the figures quoted here do not include removing snow from bus shelters or sidewalks — for Fiscal Year 2015 was only $2.7 million, according to Arlington County. As of April 25, the FY 2016 bill was $6.5 million, about $5 million of which was associated with the cleanup from January’s Snowzilla blizzard, as the county revealed last month.

Why was this year’s bill so much higher? It’s mostly attributable to equipment rental costs, we’re told.

“The majority of this cost increase was associated with heavy contract equipment used during the January 22-29, 2016 blizzard,” explained Mike Moon, Chief Operating Officer of Arlington’s Dept. of Environmental Services.

“The amount of contract equipment deployed for this event far exceeded the requirements for the previous year and cost more than $4.0 million,” Moon continued. “With more than two feet of snow, heavy contract equipment was needed for the effort, which included hauling snow in our commercial corridors (Rosslyn, Ballston, Crystal City).”

Last month Arlington said that it can potentially recoup $2 million from federal disaster assistance funds, though the reimbursement process is a lengthy one.

Arlington County Manager Mark Schwartz said in March that the county is considering changes to its snow removal efforts in the wake of January’s blizzard. Among the changes being considered is the purchase of additional heavy equipment and a new snow melter.