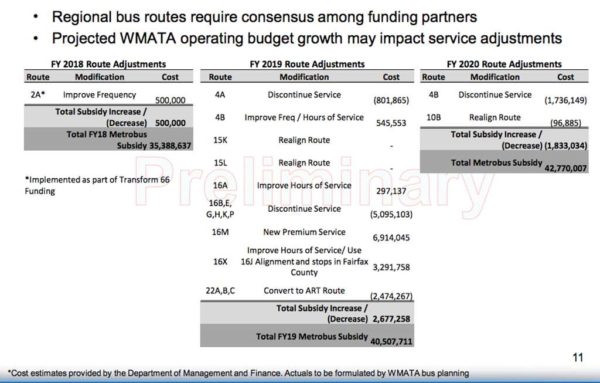 (Updated 2 p.m.) Some changes are coming to several Metrobus routes through Arlington County next year, as the county prepares for the Columbia Pike “Premium Transit Network.”

At a work session with the Arlington County Board on Thursday, county staff put forward a plan that would end seven lines that run through Arlington in FY 2019, which begins on July 1, 2018, and save the county $5.8 million:

A spokesman for the county’s Department of Environmental Services said the changes along the Pike would help make way for the so-called “Premium Transit Network,” which is projected to cost $6.9 million and launch next summer after delays. The various routes would be consolidated under that network, which the spokesman said would “result in more bus service in the county, not less.”

The new bus system was put together after the Columbia Pike Streetcar project was cancelled in 2014, with Board members at the time promising a system that would be just as good, if not better.

To try and lessen the impact of the service cuts, staff proposed improving the frequency and hours of the 4B that largely overlaps the 4A, and similar efforts for the 16A on Columbia Pike. Those improvements would cost just under $850,000.

The 4B would then be discontinued as a Metrobus route in FY 2020, saving the county $1.7 million, and made an ART route.

The 16X service from Columbia Pike to Federal Triangle in D.C. via the Pentagon would have its hours improved, at a cost of $3.2 million to county coffers. The 15K and 15L routes between the East Falls Church and Rosslyn Metro stations would also be realigned.

All told, the various service reductions and increases will cost the county just over $2.6 million more in its Metrobus subsidy, bringing that figure to $40.5 million in FY 2019.

The possibility also exists that the 22A, B and C routes through Barcroft and South Fairlington could be converted into locally-run ART routes. That would save $2.4 million in the county’s Metrobus subsidy, but would require funds to be made available through ART instead.

Cuts had been planned for FY 2018 under the county’s Transit Development Plan approved last year, but were pushed off to FY 2019. The county did not cut any Metrobus routes for FY 2018, and improved the frequency of the 2A route between the Ballston and Dunn Loring Metro stations.

That came in part due to funding from the Virginia Department of Transportation’s “Transform 66” project to widen I-66 from the Dulles Connector Road to the Fairfax Drive exit in Ballston.

Metro staff will analyze the actual costs and savings from the various changes, and bring forward a proposal to the agency’s board of directors. The board would then take public comment on any proposed changes region-wide before making a decision next year.