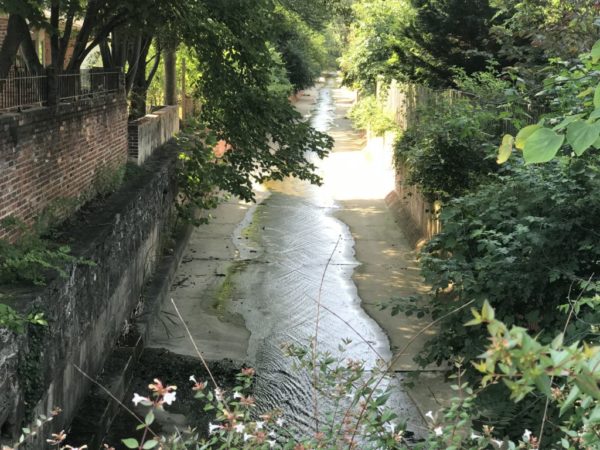 Robbery in Courthouse — Two men reportedly robbed the Dunkin’ Donuts on Wilson Blvd in Courthouse yesterday evening. The men demanded money and fled the scene with cash but did not display any weapons during the robbery, according to initial reports. [Twitter]

Kaine to Campaign in Arlington Today — Sen. Tim Kaine (D-Va.) tonight “will host a ‘Neighbor to Neighbor’ community conversation in Arlington to engage Northern Virginia voters on the critical issues facing our country and take their questions.” The event is taking place at the Barcroft Park Picnic Shelter (4200 S. Four Mile Run Drive) at 6:30 p.m.

Britney Spears Touches Down in Arlington — Britney Spears arrived at Reagan National Airport ahead of the kick off of her summer tour. Photos and video show her walking through the terminal with a small entourage. [Daily Mail]

Arlington to Pay to Help Retain Federal Tenant — “Arlington taxpayers will be on the hook for nearly $8 million over 10 years to subsidize a lease that will retain the Office of Naval Research in the county. County Board members on July 14 are expected to approve an incentive package that will keep the federal agency in its current 314,000 square feet of office space in Ballston.” [InsideNova]

Suspect Hailed Cab After Pike Burglary — “A burglar made his getaway from a scene in Arlington by hailing a taxi, according to officials. The Arlington County Police Department said the burglar targeted a business in the 3100 block of Columbia Pike near the Westmont neighborhood at about 10:25 a.m. on Sunday.” [Fox 5 DC]

George Mason Drive Detour — A “small detour” will be in place this weekend on N. George Mason Drive “as crews above remove the old half still remaining from the soon-to-be-replaced Carlin Springs Road Bridge.” [Twitter]

White Ford Bronco Profiled — Prolific local 90s cover band White Ford Bronco is the subject of a newspaper profile that dubs it the “undisputed king of D.C. cover bands.” The profile recounts that “at a recent concert at the Clarendon Ballroom, guys in button-down shirts and Birkenstocks pumped their fists to the chorus of ‘Mr. Jones.'” [Washington Post]

Metrobus Delays This Morning — Metrobus passengers reported delays and missed routes this morning, which WMATA says was the result of “bus operators reporting late to work as part of a collective labor action by their union.” [Twitter, WTOP]