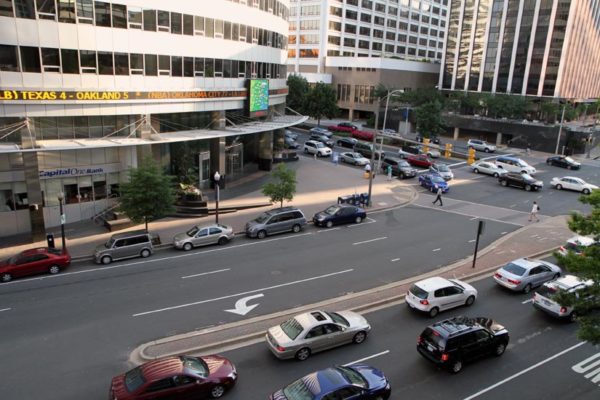 Plans are coming together for a major transformation of Rosslyn’s streets, as county officials advance a series of proposals designed to someday make the neighborhood a bit more friendly to cyclists and pedestrians.

The county is holding a public meeting tomorrow (Wednesday) to unveil a newly revised design for the future of Rosslyn’s street network. Known as the “Core of Rosslyn” study, planners have been working since 2017 to finalize a redesign of the neighborhood that comports with the “Rosslyn Sector Plan” the County Board adopted in 2015.

Some of the proposed changes, revealed in detail last fall, are quite substantial.

Perhaps the largest one is the removal of the Fort Myer Drive tunnel under Wilson Blvd, transforming it into a traditional at-grade, signalized intersection. The county could also follow through on long-contemplated plans of building a car-free, “pedestrian corridor” running from 18th Street N.’s intersection with N. Oak Street to N. Kent Street, replacing the Rosslyn skywalk system to make the Metro station more accessible.

Another major change included in previous proposals was the conversion of N. Fort Myer Drive, N. Lynn Street and N. Moore Street into two-way streets. But officials are now rolling out a revised set of plans that would keep the latter two streets as one-way roads, after hearing feedback from the community on the study.

Planners have indeed seen Lynn Street as a particularly challenging option for opening up to two-way traffic. Though officials expect the change would make things a bit less confusing for drivers, it would also force the county to find new access points to the G.W. Parkway, I-66 and the Key Bridge.

Other proposed changes include 14 new or improved crosswalks for pedestrians, and more than 1.3 miles of new protected bike lanes. Those are largely set to run along Fort Myer Drive, N. Moore Street and N. Nash Street, and are designed to ease bike connections to the Key Bridge and the Mt. Vernon and Custis Trails.

The public meeting on the “Core of Rosslyn” plans is set for the Observation Deck at CEB Tower (1800 N. Lynn Street), located on the 31st floor of the massive office building, tomorrow from 4-7 p.m.

The county hopes to have final results of the study ready for consideration sometime this summer.