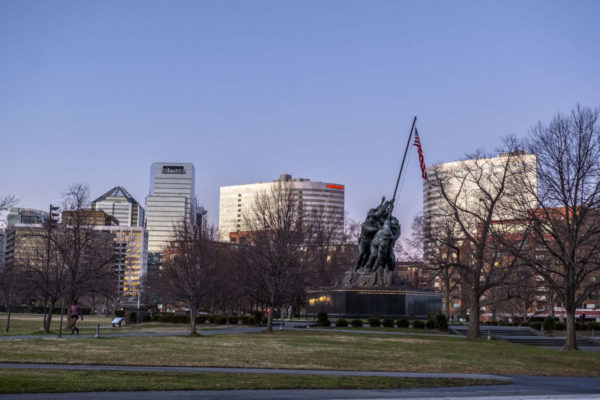 Warren Blasts Bloomberg at Arlington Event — “Senator Elizabeth Warren of Massachusetts said Thursday that Michael R. Bloomberg should not be the Democratic presidential nominee because of newly surfaced comments he made 12 years ago in which he said the end of a discriminatory housing practice had helped contribute to the 2008 financial crisis.” [New York Times]

Warren Draws Big Crowd at Wakefield — Last night’s Elizabeth Warren presidential campaign event at the Wakefield High School gym drew national media, a crowd of thousands and lines that stretched around the block. The gym’s scoreboard was programmed to say “ELIZABETH WARREN” and “20:20.” Warren later addressed the overflow crowd outside the school.

Bike Rack at EFC Metro Has Cost Millions — “Metro has spent $3.8 million and taken five years to build two unfinished bike racks — at East Falls Church and Vienna Metro Stations. WMATA originally budgeted $600,000 for each rack, but the price tag has soared to $1.9 million each. The covered bike shelters will house 92 bikes, putting the price tag at more than $20,000 per bike… The projects were supposed to be completed in December of 2015 but remain unfinished in 2020.” [WJLA]

EPA May Move Out of Arlington — “The Trump administration is planning to move the Environmental Protection Agency from leased space at Potomac Yard to the federally owned William Jefferson Clinton complex in downtown D.C… The GSA plans to shift workers from One Potomac Yard in Arlington starting in March 2021, boosting occupancy in the Clinton building by about 1,200 employees.” [Washington Business Journal]

Megamansion Skews Arlington Real Estate Stats — The average sale price of a single-family home in Arlington was more than $2 million, though that figure was skewed by the nearly $45 million sale of an estate along the Potomac River, the priciest home sale ever in the D.C. area. [InsideNova]

Arlington Startup Sells to Texas Firm — “Mobile Posse announced today that it has entered into a definitive agreement to be acquired by Digital Turbine, a mobile delivery and app advertising company headquartered in Austin, TX. The acquisition by Digital Turbine builds on both firms’ strategies of creating frictionless mobile app and mobile content solutions for carriers and OEMs, thus creating effective advertising solutions for brands and app developers.” [Mobile Posse via Potomac Tech Wire]