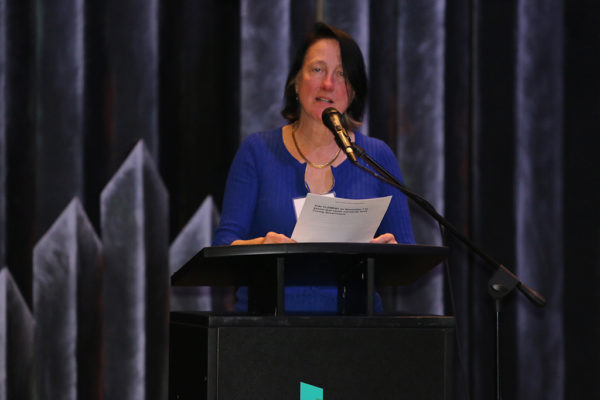 As Election Day nears, Audrey Clement, the Independent candidate for Arlington County Board, took shots at her opponent, County Board Chair Libby Garvey, on the county’s Missing Middle Housing study.

Facing a shortage of moderately-priced housing options in the “missing middle” between apartment buildings and single-family homes, the County is kicking off a study to figure out whether it should open up some areas zoned only for single-family homes to denser housing types.

But Clement, a perennial candidate for the last decade, said Garvey has given outsized importance to the racial-justice component of this plan to gloss over economic problems. One problem is the possibility that these new housing options may still be out-of-reach for Black residents, according to Clement.

“The County has been very successful in persuading people it is a social-justice and racial issue, but the people that they are addressing are not aware of the dynamics of the real-estate market,” Clement said.

In the mid-20th century, Arlington began zoning most of the county for single-family homes and forbade the construction of more compact dwellings, which were more commonly inhabited by the county’s Black population because fewer could afford detached homes. There were also deed covenants that explicitly prevented non-whites from buying homes, even if they could afford them.

Today, 75% of the county is zoned for single-family homes. Given the median income earned by Black Arlingtonians, homes in all but a few neighborhoods are out of reach for most.

“What we’ve got now is the result of very intentional systemic racism,” Garvey said of local housing patterns. “Whether this study is going to fix it or not is hard to say. I don’t think we’re saying that.”

Clement agreed that the effects of Arlington’s exclusionary housing policies in the 20th century remain. She said what is disingenuous is framing duplexes, townhouses or other small-scale, multi-family housing as a way to correct Arlington’s racist past, when some data suggest these new options could be unaffordable due to the county’s inflated land values.

“Due to ever increasing land values no one earning less than area median income will afford the housing built on densified lots,” Clement wrote. “In addition many moderate income residents, including people of color, will be forced to sell when real estate assessments escalate in their up-zoned neighborhoods.”

Garvey did not refute the possibility that the study could find that these alternatives would not necessarily be more affordable, but said it is “way too early” to draw conclusions from a study in its infancy.

“The only thing we’ve said is that we have a real issue with sufficient diversity of housing to meet a lot of needs,” she said.

Clement argues that the current unaffordable housing landscape in Arlington is because the county allowed affordable homes to be torn down and replaced with more expensive housing. Renovating existing structures would be a better solution, she said.

This spring, the County Board voted to eliminate a tax credit to landlords who renovate their buildings. Senior Housing Planner Russell Danao-Schroeder said the program had outlived its usefulness: Only large developers were availing themselves of the credit to keep their buildings at the top of the market.