The old Wendy’s lot in Courthouse, demolished in 2016 for an office building that never came, could be the site of a new development.

For almost five years, the triangle lot at the corner of Wilson Blvd and N. Courthouse Road has sat vacant. Construction crews working on 2000 Clarendon, a condo project across the street, have used it as a staging area for the last two years.

The proposed building, which is 16 stories tall and has 231 units, 74 residential parking spaces and some bicycle parking, is expected to achieve LEED Gold certification. The developer is also proposing a public plaza where Wilson and Clarendon Blvd meet.

“Recognizing the property’s location, topography and prominence in Courthouse, the applicant proposes … to redevelop the property with a high-rise residential building with ground-floor retail and iconic architectural features,” said Nan Walsh and Andrew Painter, attorneys for the land use law firm Walsh, Colucci, Lubeley & Walsh, in a letter to the county.

The filing comes four months after the company purchased the lot for $19 million from Carr Properties, according to real estate company Jones Lang LaSalle. Back in 2015, Carr was approved to move forward with plans for a 12-story office building.

Greystar made its intentions known in October 2020, when it filed conceptual plans for 2026 Wilson Blvd.

“The building, which will serve as an iconic architectural feature for the Courthouse neighborhood, will retain many of the same architectural design elements of the previously approved office building, including its glass curtain wall design,” the attorneys’ letter said. 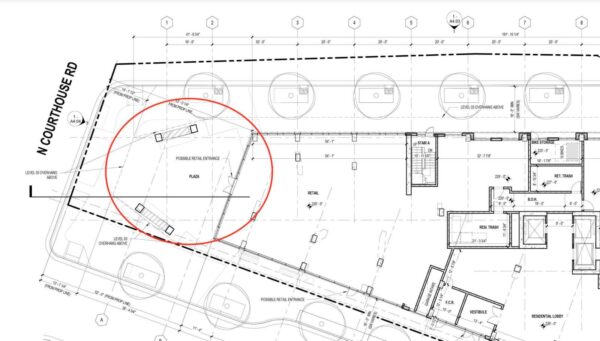 The plaza would surround a possible retail entrance at the tip of the Wendy’s site, facing N. Courthouse Road. The Rosslyn to Courthouse Urban Design Study recommends an “activity-based, pedestrian-oriented urban plaza” at that same location.

According to the Walsh Colucci team, the proposed public pedestrian plaza will be approximately 3,279 square feet with movable tables and chairs and space for temporary vendors.

The urban design study also recommends buildings do not exceed 10 stories — unless they accommodate affordable housing or community benefits. This proposal clocks in at 16 stories and 166 feet tall.

Greystar “is open to the provision of on-site affordable housing to further justify the increase in height,” Walsh and Painter said.

The applications offered no further specifics but Greystar’s legal representation said the company “will work with staff throughout the site plan process to develop an affordable housing plan.”

Greystar proposes, generally, to maintain the existing street, sidewalk and bicycle configuration that the County Board approved with Carr Properties’ office building. 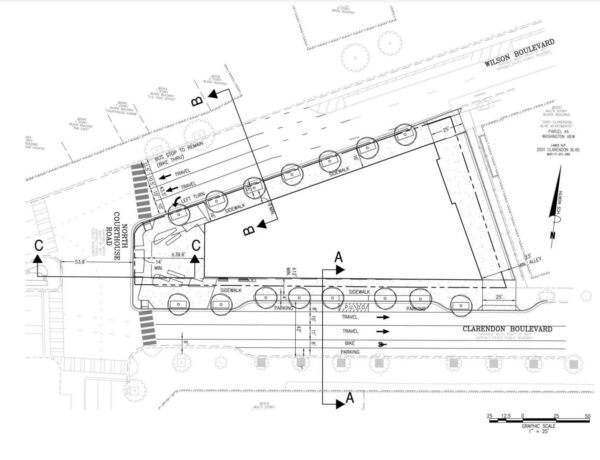 There will be no retail parking as a part of the project but Greystar’s development across the street will provide “ample retail parking to support both projects,” the attorney said, referring to the Landmark Block development, which the County Board approved last month.

Read more →
More Stories
Bike to Work Day is Back and Set for Next MonthColony Grill Gains Fan Base, Pins Hopes on Looser Dining Restrictions