A few restaurants in Arlington are reducing their food waste through a new app called Too Good To Go.

And the restaurateurs say the platform not only helps them recover profits on food that would otherwise get tossed — it also makes their businesses more sustainable and helps them reach new clientele.

Too Good To Go was founded in Denmark 2015 and made its American debut in New York City last year. Over the last 10 months, it has spread to Boston, Philadelphia, the D.C. area, San Francisco, Seattle and Portland. On days when participating restaurants have leftovers, chefs assemble “surprise bags” with extra produce or a full meal, which are sold via the app for a fraction of the cost of a regular meal.

City Kabob & Curry House (3007 Columbia Pike) is a new buffet that opened two months ago along Columbia Pike. Adnan Bishir, the assistant manager, said the restaurant’s presence on the app for the last month has gotten new customers in the door.

“We’re getting 10-15 orders a day,” he said. “It’s all from the extra food that we have from the buffet. It’s still really good food — they just make too much of it. This way, it doesn’t go to waste.”

City Kabob sells main dishes for one with rice, protein — such as butter chicken or chickpeas — and veggies for $4 instead of the regular price of $12. 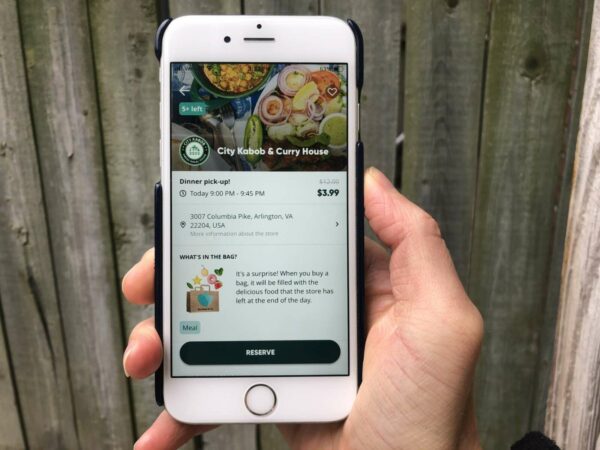 At Pentagon Row, since rebranded Westpost, the Asian fast-casual restaurant Bun’d Up (1201 S. Joyce Street) will sometimes sell bags with fresh food and buns or extra meals made but not distributed due to mix-ups involving delivery apps, co-owner Scott Chung said.

The app helps make up for slow days and is bringing out new customers who are happy to support the environmental cause, he said.

“It’s good for our customers to know we’re trying to be sustainable and helping reduce food waste,” said Chung.

Too Good To Go also repurposes leftover orders. While food pickup and delivery apps have been a lifeline during the pandemic, they come at a cost: no-shows, mixed-up orders or lost drivers, which would mean wasted food, he said.

“We’re expected to eat the costs, on top of the really high commissions for operating on those apps,” Chung said.

Over at South Block, the growing juice and açai bowl chain with multiple Arlington locations, Vice President of Product Adam Kramer said employees use the app to get extra cold-pressed, unpasteurized juice — which has five to 10 pounds of produce per bottle — to people before it expires, he said.

“So far the feedback has been awesome,” Kramer said. “We have people texting our text line asking when we’ll have stuff available on the app.”

“If we do have waste, it’s a cool way to eliminate it,” he added. “It’s also a way for people who may not ordinarily be able to afford South Block to try our product.”

Kramer said the concept is on brand for South Block, which also has a nonprofit cafe that offer fresh produce to people who are food insecure.