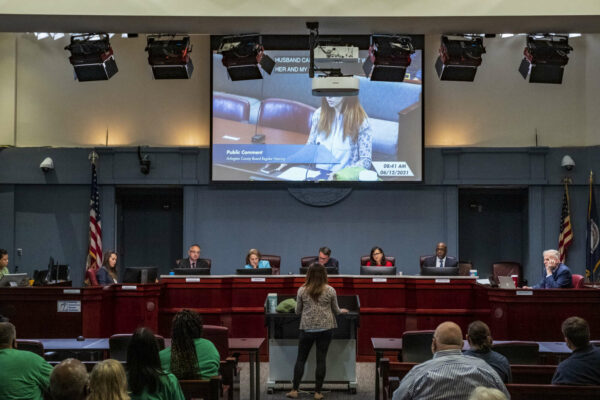 (Updated at 4:30 p.m.) Arlington has long prided itself on the pathways available to residents to have a say in local policy-making, also known as the “Arlington Way.”

But a growing number of county officials, local leaders and civic groups think the tradition, while noble in aim, doesn’t work for everyone. They say it leans too much on affluent retirees and sabotages the county’s equity efforts.

For years, Arlington County has acknowledged that its traditional engagement processes privilege those with the time, resources and connections to invest in discussions about projects, studies and policies. That leaves out a growing segment of the population outside that mold: renters, parents of young kids, people who work non-traditional hours, people without access to reliable and affordable transportation, and those who are not fluent English speakers.

Suggestions to retool, reform or scrap the process are not new, but in recent months, the topic has bubbled up in county-level conversations.

References to the “Arlington Way” arose in a County Board public comment period this summer that ran long due to controversy over the start time of a north Arlington farmers market, which shut out participation from low-income residents there to speak about filthy conditions at the Serrano Apartments. More recently, diversity concerns prompted the Arlington County Civic Federation — which provides a forum for civic groups to discuss local topics — to pass a resolution prioritizing improved community outreach and representation.

Amid this renewed focus, some novel approaches and long-term reforms have been proposed that county and civic leaders and community engagement staff tell ARLnow could widen the Arlington Way.

“Generally speaking, Arlington residents care about the issues that impact them, but do they know about it? How do they get the information?” asks Samia Byrd, Arlington’s Chief Race and Equity Officer. “We take for granted that residents know how to participate in the process.”

Board Vice-Chair Katie Cristol reprised the dilemma last week during a conversation about the community oversight board, which is currently seeking members to review cases of alleged police misconduct.

“We’ve been wrestling with… how we properly compensate people for that time and expertise,” Cristol said, as quoted by County Board watcher Stephen Repetski. “Because, frankly, that is… one of the biggest reasons you see our most heavy-hitting community engagement activities tend to rely disproportionately on well-off retirees.”

In a follow-up conversation, she told ARLnow that she’s been thinking about diversity in County Board-appointed commissions.

Six years ago, she believed that the solution would be finding and recruiting new faces at all levels of leadership. Over time, she’s realized the homogeneity of civic leadership is a consequence of how engagement is structured. Night meetings — or even day meetings — at county headquarters disadvantage students, parents and anyone who doesn’t work 9 a.m. to 5 p.m., including overworked young professionals.

“It actually was not just about inviting more diverse people to the table, as defined, but maybe the table was defined in a way that made it hard for certain people to sit there,” she said. “There have to be many ways to engage.”

Those involved in county communications tell ARLnow they likewise think about diversity, not in terms of commission composition and structure, but in terms of regular outreach.

Assistant County Manager and Director of Communications and Public Engagement Bryna Helfer has been tackling community engagement homogeneity since she was hired in 2016. She and Byrd both say “it’s been a challenge” to reach people who aren’t white, affluent or a retiree, as well as people who don’t already know how to get involved or navigate the county website.

When Byrd did engage with people who have been traditionally marginalized in county processes, she said they criticized the “Arlington Way.”

“One of the things we heard regularly and consistently was that the ‘Arlington Way’ lacked diversity and inclusion,” she said.

The county now has a guide to understanding who benefits and who is burdened by the policies and projects under review, and a data dashboard for determining who will be impacted, Helfer says. She added that staff are making inroads in Black, Latino, immigrant and faith communities through meetings with community leaders.

Apartment-dwellers also get left out, says Nicole Merlene, a former Democratic candidate for state Senate. Most renters and condo owners don’t know they live in or can join a civic association, since buildings consider civic association outreach to be solicitation, which is often prohibited on building grounds.

This means renters rarely learn about topics relevant to their neighborhood, since civic associations disseminate that information to members and the county regularly goes through civic associations to get a sense of what residents think.

“It is the majority population of the county that is severely underrepresented,” she said. “We just need to do a better job of giving them information.”

One obvious barrier is language, given the broad array of languages spoken here. But translation has to mean more than a word-for-word reproduction, Byrd says.

“It means thinking of translating culturally, based on how they interact with the government based on their race, based on where they originated from,” she said.

Byrd says many members of historically marginalized community groups continue to face barriers in accessing housing and engaging with the government, but when asked a broad question in a survey like “What do you think of race or racism?” they tend to register an ambivalent response because culturally, those aren’t terms they may think in.

“That was a learning experience: just because we translated something, didn’t mean we understood what the issues they were facing were,” she said.

“We are committed to getting plain language,” Helfer said.

Technology has made it easier to send out newsletters and surveys, but officials suggest that the most successful outreach involves meeting people where they are comfortable rather than expecting them to engage on the county’s terms.

Helfer pointed to pop-ups outside grocery stores and at the Crystal City Waterpark, and county-made drink coasters and beer cups with vaccine messaging that were distributed in restaurants and at events.

Cristol mentioned the recently-reopened Lubber Run Community Center. Before renovations to the center, county staff met with the kids who play soccer there, bringing chalkboards so they could explain what they want from a recreation center and sports facilities.

Merlene, meanwhile, came up with a way to facilitate renter engagement by the county and area civic associations. She compiled and distributed to county officials a spreadsheet of every apartment complex in Arlington with contact information for the building’s property manager. It also uses census data to show how many people go unrepresented by local civic associations.

She got the idea after she became a lone representative of the large swaths of millennial renters in the North Rosslyn Civic Association, membership of which mostly consists of older retirees.

“I felt a duty to continue to represent that group,” she said.

Some of the most entrenched examples of the “Arlington Way” are County Board-appointed commissions, which self-select for people who can dedicate hours of their week and years of their life to the sometimes painfully slow task of guiding county decision-making.

Cristol said she has news about some possible solutions to the representation issue that she can’t yet share, but which could come before the County Board during its October meeting.

For now, the Board is thinking about allowing more participation in virtual meetings, even after the pandemic, and compensating people for public participation.

The Board is pressuring the state to change open meeting laws to allow for broader virtual participation by commissioners, something currently on allowed in emergencies. When the pandemic hit and all meetings went virtual, participation generally increased, she said, giving occasional participants and commissioners alike a taste for involvement that doesn’t require setting aside family obligations.

Another issue is compensation, which can take many forms but likely will not involve giving out cash, she said. Cristol pointed to engagement done a few years ago regarding future planning for Columbia Pike, organized by the Arlington Partnership for Affordable Housing, that involved multi-lingual sessions with dinner and childcare provided.

That was funded by an outside grant, she said. Replicating it with public money has to be targeted in such a way that it is fair while only helping those who “need it.”

“I think it’s a matter of communicating respect for the expertise that people have, especially those who have been historically disenfranchised,” she said. “As a government, we are not asking somebody’s input as a favor to them — we’re asking them to share the expertise so the work of government can be better.”

END_OF_DOCUMENT_TOKEN_TO_BE_REPLACED

More Stories
The Arlies: Vote for Your Favorite Apartment BuildingMeet the Kristin Francis Team, One of Arlington’s Favorite Real Estate Agents for Sellers