The newest version of the plan postpones changes to Abingdon, where enrollment is currently manageable for next year, according to Durán. Students would have been moved from the school in Fairlington to Charles R. Drew Elementary School in nearby Green Valley, echoing a similar proposal in 2018 that became controversial.

Gunston and Wakefield are still over-capacity, so some planning units will be moved to Thomas Jefferson Middle School and Washington-Liberty High School.

“The proposed changes are manageable among the identified schools that we’ve talked about and we’ve engaged with. The planning units included in this process should not need to be moved again in the next few years, and this limited process provides some additional to understand enrollment fluctuations we’re seeing caused by the pandemic, and any shifts in projects we may see,” he said during the Nov. 16 School Board meeting.

“We want to make sure access to immersion schools is convenient to families and students nearest the location,” Durán said.

Relief for Gunston and Wakefield

The boundary changes for Gunston and Jefferson will reassign 140 third- to fifth-graders while the Wakefield and W-L changes will reassign 162 students. 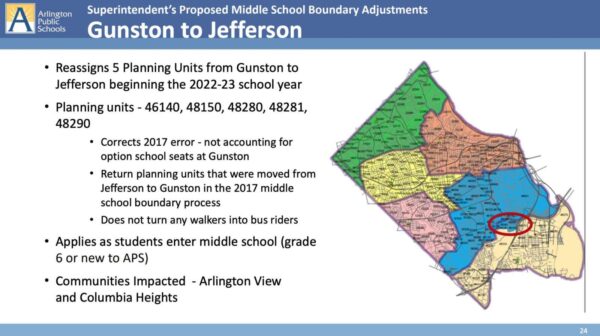 The proposal to move Wakefield students to W-L comes as the latter is about to unveil a new wing of the school — the former Education Center administrative offices — with room for up to 600 students. 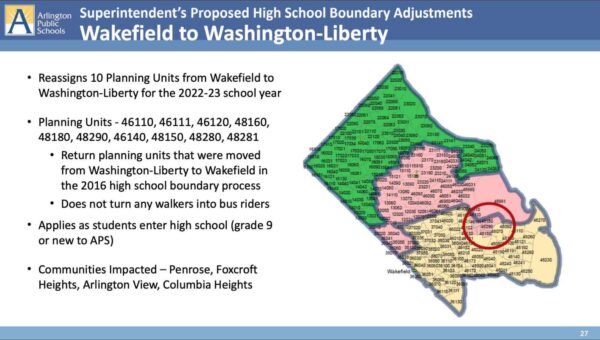 APS says the extra space at the Education Center will provide enrollment relief for Wakefield and cut down on W-L’s waitlist for the International Baccalaureate (IB) program.

“The number of applicants to the IB Lottery and number on the waitlist has increased each year over the last four years,” according to the 2021 boundary process website.

APS may consider targeted transfers from Wakefield to Yorktown if forthcoming enrollment projections for 2022-23 suggest unmanageable levels at Wakefield — even with the boundary adjustment. 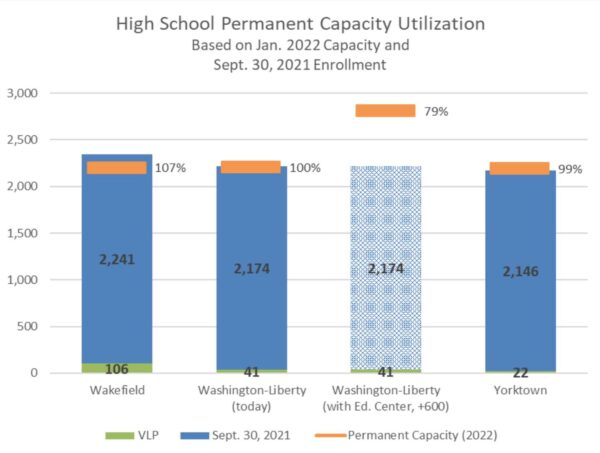 The new high school boundaries would reverse moves made in 2016 to address overcrowding at W-L, but those who were moved away from W-L in 2017 will not be moved back.

In 2017, APS redirected Boulevard Manor kids from W-L to Yorktown High School. Students say when they graduate from Kenmore Middle School and head to Yorktown, they lose many of their middle school friends. To avoid that, they apply for W-L’s IB program or for a neighborhood transfer.

“I can make new friends, but the point is that it’s completely reasonable that I want to go to high school with my friends — just like all the middle schoolers in Arlington,” said Kenmore eighth-grader Xavier Anderson, during the Nov. 16 meeting.

A coalition of Boulevard Manor parents said the new proposal should, but won’t, resolve these social problems.

“Boulevard Manor families have lobbied the School Board for years to fix this problem, either by rezoning middle schools or returning us to W-L,” the group said in a letter. “Now that 600 new seats are being added at W-L starting next school year, APS has a perfect opportunity to remedy this situation, yet still balks at taking action.”

The proposed changes to Arlington’s immersion schools, meanwhile, would divide the feeder schools between North and South Arlington.

Students will not be required to move from their current school. For the next two years, APS will provide transportation for students zoned for Cardinal, Nottingham and Tuckahoe who choose to stay at Claremont.

The proposal “makes minimal changes to the current feeder structure,” according to a recent email to APS families.

The school system plans to conduct a countywide elementary boundary process in fall of 2022.