The owner of a two-family home near Crystal City says he may cancel his redevelopment plans because county approval processes have delayed construction and run up costs.

“As of right now, the project is on hold, possibly dead, because the County delayed it so long that the prices of construction (up 40%) not to mention the $150,000 in costs so far to get it approved, have made it unaffordable,” owner Les Garrison tells ARLnow. “The payback time is now unreasonable.”

It’s an outcome that Planning Commission members have said would be avoided if homes like his — duplexes on nonconforming lots — enjoyed the simpler, cheaper reviews that allow owners and developers to replace aging single-family dwellings with larger, luxury homes, sometimes referred to derisively as “McMansions.”

The main difference, they say, comes down to the fact that it’s a multi-family building.

Garrison’s proposal requires community review as well as Planning Commission and County Board approvals because he plans to increase the square footage of his house, which sits on a smaller-than-average lot. But commissioners argue more renovations on nonconforming lots will come forward and the county should preempt them with a faster approval track.

Since these hypothetical projects would update existing low-rise multi-family buildings — which are not permitted in many neighborhoods under current zoning — commissioners suggest considering these changes via the Missing Middle Housing Study. The study’s primary goal is to evaluate whether county codes should allow housing types like as duplexes and townhouses in districts zoned exclusively for single-family homes.

“As much as it’s important to end legacies of exclusionary zoning practices, we also have to be certain there are administrative options for improving and expanding existing multi-unit housing,” Planning Commission Chair Daniel Weir said during a meeting with the County Board and the planning division earlier this month.

Such projects go through Site Plan Review, which major development projects use, but as a potential alternative they could go through the Board of Zoning Appeals, which hears special exception requests from single-family homeowners, James Lantelme, Weir’s predecessor, previously said. 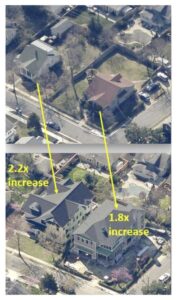 Multi-family homes like Garrison’s and oversized single-family homes are linked in another way: both often result in greater lot coverage, which often means fewer trees and plantings. The relative ease with which “McMansions” are built, compared to similar-sized multi-family units, has led some County Board members to ask the question: if both are permitted, just how big is too big?

Building up to tear down

Opposition to adding density falls into a few buckets, such as impact on existing infrastructure and loss of natural resources.

On environmental degradation, the county says keeping out duplexes won’t preserve neighborhoods from the tree loss and stormwater runoff associated with development, given the teardown-rebuild trend. Adding multi-family homes would, however, open up neighborhoods to people who can’t afford the average sale price for a rebuild in Arlington, which currently stands at $1.7 million.

Over the last decade, 1,245 homes came down and were rebuilt, for an average of 125 homes per year, according to a county report. Typically, the tear-downs are 1,515 square feet and the new construction is 4,750 square feet. This contributed to the drop in tree canopy coverage from 43% in 2008 to 41% in 2016, another county report says.

“This is a rather fast-moving problem,” County Board member Takis Karantonis said during the February meeting.

It’s one member Libby Garvey said “we should dip our toes into” through the Missing Middle study.

“Between now and October, we might have a better handle on some emerging recommendations — but I do expect that will be considered in some way,” he told County Board members. 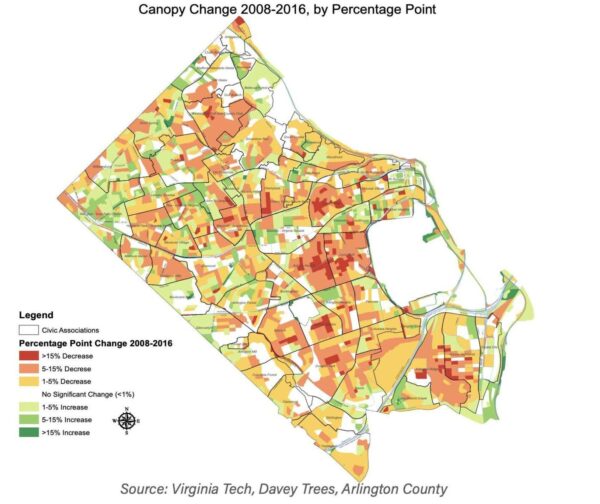 To limit or not to limit lot coverage

After that, land use attorney Barnes Lawson said, building an addition made less sense than razing the home and building something taller within the lot coverage maximums.

“I think [lot coverage requirements are] too strict,” he says. “When people seek relief from the Board of Zoning Appeals, they don’t get it, which encourages the razing of the single-family homes — which is opposite of what the county is trying to accomplish.”

Going this route is also more lucrative, says Adam Theo, an independent candidate for the County Board and the co-founder of YIMBYs of Northern Virginia (the acronym is short for “Yes In My Backyard”).

“With area land values increasing far faster than inflation year after year plus our very restrictive rules on housing, so-called ‘McMansions’ are becoming the only type of housing that people can build that fits their needs and provides enough economic return,” he said.

A more flexible code could let builders reconfigure houses to save trees or ditch side yards for front and backyards with room for more trees, he said.

Anne Bodine of Arlingtonians for our Sustainable Future — a coalition of residents who criticize the Missing Middle study for ignoring how density impacts infrastructure, the environment and the budget — attributes today’s McMansions to yesterday’s zoning changes.

She argues that lot coverage requirements could go smaller for everyone, to mitigate the tree clearing paving associated with new multi-family construction.

“It’s a trade-off,” she said. “Everyone agrees there’s a problem with housing at the middle level. It’d be nice if we had a bit better dialogue, I think.”

If you build it, they will come

While the county and residents hash out whether to open up neighborhoods to multi-family homes, demand is increasing for those housing types, says local developer Andrew Moore.

The president of Arlington Designer Homes says teardown-rebuild projects comprise 70% of his business but clients often ask him if he can build a duplex — for rental income or for living spaces for au pairs and aging relatives.

“I think you could very easily put two to three families in a house permitted by-right for one family,” he said. “If I could build duplexes in the right locations, I would absolutely do it, without a doubt. There’s absolutely the market there.”