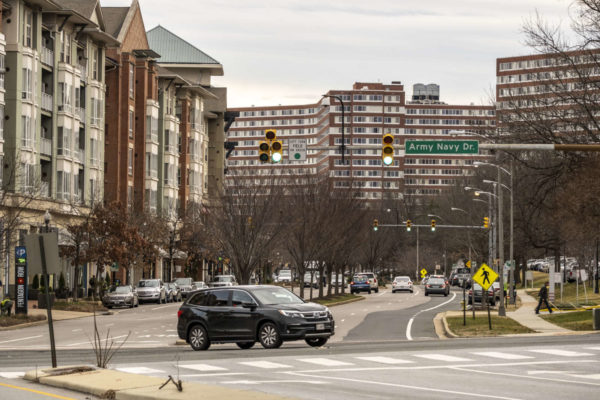 A longtime project to make pedestrian, cycling and transit upgrades to Army Navy Drive has taken the next step forward.

Arlington County has sent the project out for bidding by contractors, while staff continue to acquire the easements needed for construction.

“Project staff expect the easement process to be wrapped up by the time the construction contract appears before the County Board for approval — anticipated later this summer,” Dept. of Environmental Services spokesman Nate Graham said.

Construction could start this fall and be completed in the summer of 2025, according to the project webpage. Initially, the county had expected construction to begin in spring 2020 and be complete this spring, but extra tasks required to receive federal aid dragged out the planning process by a few years.

A coalition of local transit advocates celebrated the news, which has been seven years in the making.

The Army Navy Drive Complete Streets Project is officially out to bid! Many thanks to everyone who has worked to see this transformative project through over the last 7+ years! https://t.co/qSMXM7ioMD

The south side of Army Navy Drive will have a two-way bike lane protected by a line of trees. This will link to a future two-way bicycle lane planned for S. Clark Street, between 12th Street S. and 15th Street S. and the planned protected bike lanes on S. Eads Street, which will run past both phases of Amazon’s HQ2.

“The project will rebuild Army Navy Drive within the existing right-of-way as a multimodal complete street featuring enhanced bicycle, transit, environmental and pedestrian facilities,” the county says. “The goal of the project is to improve the local connections between the Pentagon and the commercial, residential and retail services in Pentagon City and Crystal City.”

The new Army Navy Drive will be reduced to two through lanes in each direction, narrowing to one lane east of S. Eads Street.

The reduction will accommodate a bus lane between S. Joyce Street and S. Hayes Street so that buses will not block traffic while loading passengers. This dedicated transit lane will help extend an existing network of bus lanes from the City of Alexandria to Crystal City into Pentagon City.

The project’s early phases kicked off in the summer of 2015 with a traffic analysis evaluating how biking, walking, scooting and driving conditions would be impacted in 2020 and 2040 by the ongoing redevelopment of Pentagon City and Crystal City. That has since been expedited by the ongoing construction of HQ2.