After five years, Arlington County is putting finishing touches on its Complete Street plan to improve walking, biking and driving conditions along a stretch of Army Navy Drive in the Pentagon City area.

The updated plans — which are 90% complete — were presented in a virtual public hearing on Wednesday. County staff are taking public comments via email on this version until Dec. 4, and the final plans will be submitted next summer. Construction on the section of road from S. Joyce Street to S. Eads Street is slated to begin in 2022.

The $16.87-million project aims to reduce conflicts among cars, buses, bikes and pedestrians with narrower lanes, stretches of bus-only lanes, protected left turns and signalized right turns, clearer sidewalks and shorter crosswalks. The south side of Army Navy Drive will have two-way bike lane protected by a line of trees. 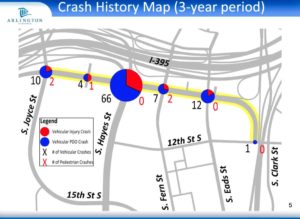 lot of the signalizations will improve safety, prevent fatalities, reduce collisions, things like that,” Jon Lawler, the project manager, said during the meeting.

Crashes happen frequently in its intersections: Staff said the S. Hayes St/I-395 off-ramp intersection had the second-most collisions of any Arlington intersection in 2016.

The measures mean the new Army Navy Drive will be reduced to two through lanes in each direction, narrowing to one lane east of S. Eads Street.

“This segment has much lower traffic volumes than the other four blocks of the project corridor,” Lawler said in an email.

Reducing a lane of traffic to accommodate a bus lane between S. Joyce Street and S. Hayes Street will actually improve flow because buses will not block traffic while loading passengers, he said.

Traffic lanes will be narrowed to slow down cars, but staff are not planning to propose a lower speed limit, which is 35 miles per hour, Lawler said during the meeting.

Construction is still a ways off. Staff expect construction to begin in the spring of 2022. With work scheduled block by block to minimize disruptions, it could last until the fall of 2024. Original plans had construction starting in 2020 and ending in 2022.

Lawler attributed the delays to the additional tasks needed for a project receiving federal aid.

“For this project, it took much longer to receive our National Environmental Policy Act document approval than we had envisioned,” he said in an email.

Staff skipped the 60% design phase to make up for lost time, he said.

After the medians are removed, work will start on the south side of Army Navy Drive, beginning with the area where Amazon HQ2 will be, along S. Eads Street, and moving west. Once the medians are replaced, the road will be repainted and striped, concluding the project.

Lawler said in the meeting that “we won’t have any conflict” with Amazon construction.

“This way we don’t have a missing link in the system,” Lawler said in the meeting.

Staff could not insert this change into this project, as it is receiving federal funding, so they created a separate capital improvement project to address it, he said. 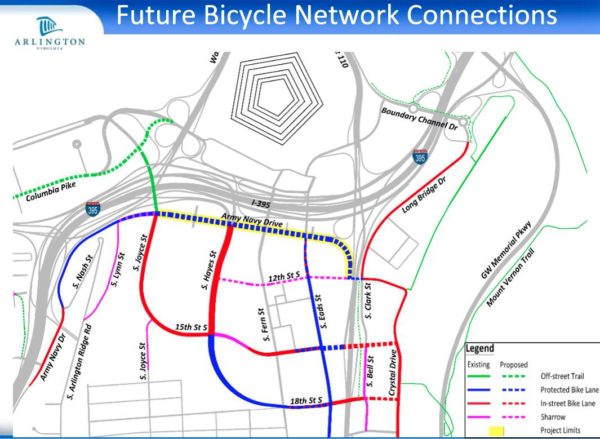 From S. Lynn Street — near Prospect Hill Park — to S. Eads Street, Army Navy Drive is “pretty uncomfortable to use scooters and bikes on,” Lawler told ARLnow after the meeting. “The changes will provide them a safer route for them to use.”

With the changes, bicyclists on Army Navy Drive will be able to use the major east-west link more easily to connect with the Mount Vernon Trail and get to Washington, D.C., he said.

Another change was to align the bumpy pedestrian ramps with the crosswalk. Initially, the ramps were perpendicular to the crosswalk, which advocates said directs vision-impaired pedestrians into harm’s way.