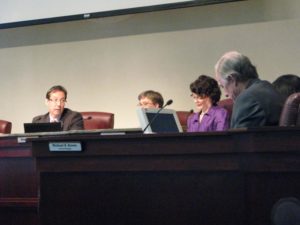 It was a long night for the county board, which didn’t adjourn its recessed meeting until a few minutes after midnight. In addition to a controversial resolution regarding the Secure Communities program, a briefing on next year’s budget projections and the passage of the Crystal City Sector Plan, the board took a number of other significant actions.

The board heard a presentation by County Manager Michael Brown regarding staff research into the proposed development plan for East Falls Church. Details are available on the county’s web site.

Funds for the design of a better Ballston beaver pond were approved unanimously. The $471,842 contract calls for a new design that will allow the pond to do a better job of treating stormwater while still providing a habitat for wildlife.

A plan to renovate 162 apartments in Colonial Village was approved unanimously. The board looked into concerns about parking and trash expressed by neighboring residents, but otherwise made no alterations.

After another somewhat lengthy discussion about outdoor patios, the board voted unanimously to renew Hard Times Cafe’s outdoor seating permit. The board specified an allowance of four tables and eight chairs on the North Highland Street sidewalk during dinner time.

The board voted 4-1 to advertise a steep fee increase for restaurant and food vendor licenses. The board was careful to emphasize that the fee hike, from $100 to $285, was mandated by the state and already in place in neighboring jurisdictions. The fee would apply evenly to brick and mortar restaurants and mobile food vendors.

At the very end, the board approved some sort of settlement with the owner of the long-delayed Bromptons development in Cherrydale. Update at 11:15 a.m. — The settlement deals with a dispute between the owner and the county over utility undergrounding. Under terms of the settlement, Bromptons owner R15, LLC will pay $255,000 to a utility fund.