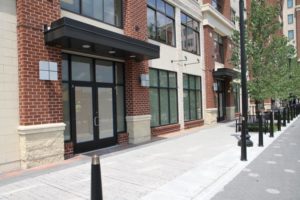 RedRocks Pizzeria will be opening its first Arlington location in the Penrose Square development (2501 S. 9th Road) along Columbia Pike, according to public permit records.

RedRocks, which has locations in the District and in Old Town Alexandria, specializes in Neapolitan-style pizza cooked in a wood-fired oven. In addition to various varieties of specialty pizza, its menu features Italian appetizers, salads, paninis, calzones, desserts and a wide variety of beer and wine.

The restaurant’s Columbia Heights location, in the District, first opened in 2007. It opened its Alexandria location in 2010. Arlington will be the D.C.-based company’s third location. ; it appears to be in the early pre-buildout stages.

RedRocks will be joining a variety of restaurants and other businesses that have opened or will be opening soon in Penrose Square, located along the 2400 block of Columbia Pike. This afternoon construction was taking place in the future Eamonn’s Dublin Chipper. Work is also either underway or about to get underway at future locations for Mancini de Paris Salon & Day Spa and Menchies Frozen Yogurt. Taqueria Poblano and Columbia Pike Family Dentistry, meanwhile, recently opened in Penrose Square.