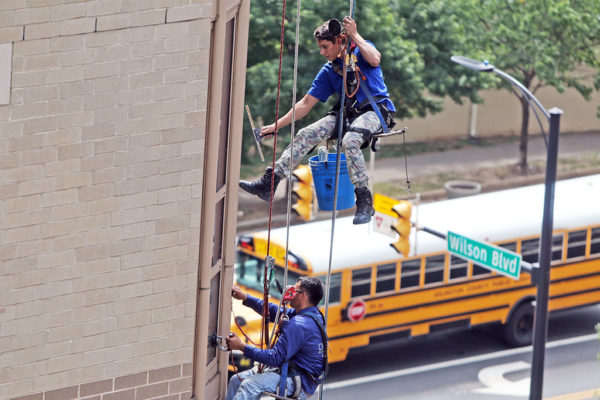 ‘Mabel’s Restaurant’ Coming to Arlington Heights — The restaurant coming to the grounds of the Dominion Apartments, at the former Sherwin Williams paint store (3411 5th Street S.), is called “Mabel’s Restaurant.” An outdoor seating area is planned for the restaurant, according to permit filings. [Arlington Economic Development]

Northam Visits Amazon — “In June, we were excited to open our first temporary office space for our Arlington headquarters in Crystal City. Today, we welcomed @GovernorVA to tour our new work space and meet with Amazonians from the Commonwealth.” [Twitter]

Glebe Road Bridge Project — “The Virginia Department of Transportation on Tuesday, Aug. 13 will hold a community forum on its plans to rehabilitate the Route 120 (North Glebe Road) bridge over Pimmit Run to improve safety and extend the bridge’s overall lifespan. The event will be held on from 6:30 to 8:30 p.m. at Williamsburg Middle School, 3600 North Harrison St. in Arlington.” [InsideNova]

‘Drunkard’ Ruling Won’t Be Appealed — “Virginia’s attorney general on Friday said he will not appeal a ruling that struck down a state law allowing police to arrest and jail people designated as ‘habitual drunkards.'” [Associated Press]

Oil in Sink Causes ‘Fatbergs’ — “If you pour used cooking grease down the kitchen sink, you’re not alone — according to a new survey, 44 percent of respondents in the D.C. region pour cooking oil, fat, or grease down the sink at least occasionally. In doing so — rather than dumping it in the trash–you may be contributing to the creation of something truly horrifying — a fatberg.” [DCist]